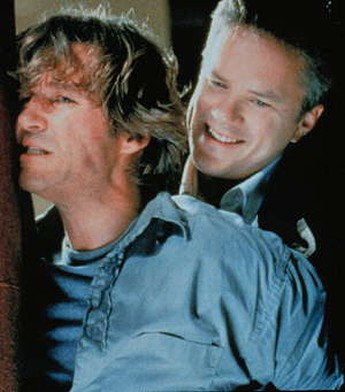 For the vast majority of the time, this plods along exactly as you’d expect: Bridges plays a lecturer who grows to suspect his neighbour and his wife (Robbins and Cusack) of being terrorists. Are they? Don’t be stupid. Of course they are, otherwise there’d be no movie! And so the movie lollops along in prosaic fashion, though our villainous married duo do a decent job of being normally creepy – or is that creepily normal? The script is just too coincidental and obvious: Bridges teaches a course in terrorism, and his wife was an FBI agent killed in the line of duty, so what are the odds of mad bombers living across the road? Davis’s character is irritating, clearly only there to give Bridges someone to explain things to, and might as well have a target on her forehead. Then, just as you’ve decided picking lint out of your teeth is more fun, the carpet gets pulled out from under you in a very unexpected and entirely satisfying way. It’s almost as if a different writer took over – what I want to know is, where were they hiding for the first 95 minutes?