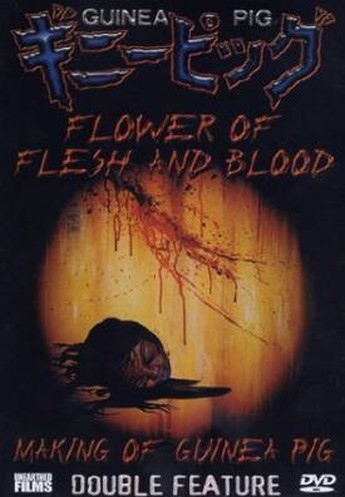 “When crimson blood crawls over a white woman’s skin like a living thing, she blossoms into a flower of flesh and blood whilst drowning again and again in a bloody sea of rapture and ecstacy”

[14] With the effective death of the horror film in Hollywood, or at least its absorption into the mainstream, fans have been looking elsewhere for their fix of horror. Germany has given us the works of Jorg Buttgereit; from Hong Kong we’ve had Man Behind the Sun; New Zealand produced the wildly warped mind of Peter Jackson. But perhaps the most notorious film of recent years is Japanese: Flower of Flesh and Blood, or Guinea Pig, as it’s often referred to. It’s almost an hour long and depicts the abduction and dismemberment of a woman by a modern-day Samurai. There’s no plot, no characterisation and speech is limited to some monologues. With few of the cinematic trappings one expects from a film, it’s perhaps not too surprising that soon after it’s arrival, it was suggested the effects are not actually effects, and that it is the often-discussed but never seen creature, a snuff movie.

And the effects are very, very good, especially coming from a country more noted for rubber-suited Godzillas than Savini-style flesh shredding. Some measure of just how good can be gained from the fact that when Customs recently seized a copy being sent to an employee of the National Film Theatre, they had to call in forensic experts to determine it was not real. The poor sod who’d ordered it, instead of the usual wrist-slapping letter, got a six hundred quid fine. HM Customs clearly do not like being made fools of, but this does seem a tad excessive for importing a cassette of special effects. And in America, Charlie Sheen apparently reported the tape to the FBI, proving again that common sense is no prerequisite for an acting career. 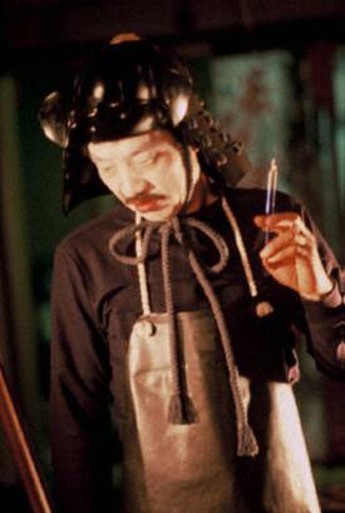 Even many die-hard horror fans feel that Guinea Pig is pushing the boundaries too far. The film poses a lot of unpleasant questions to the viewer, the most obvious one being the old chestnut, “Why am I watching this?”. One can find justification in several ways – admiring the effects, for example – but none of them allow you to relate to it as a movie; identification with the characters, for example, is near-impossible. But can a better reason be found?

Let’s start by reiterating one thing: it’s not real. It’s merely an entry in a series of semi-underground Japanese films which explore various facets of horror. Strange though many of their moral concepts may seem in our eyes, the Japanese would not permit the open distribution of a snuff movie, and the documentary The Making of Guinea Pig gives the game away in any case. It’s not the first film to have gained notoriety through the supposed ‘death’ on screen of a participant. But the major difference is that films like Snuff and Faces of Death are obviously fake, to anyone with an ounce of common sense. Watching Guinea Pig for the first time, I had almost to adopt the old standby: “Keep telling yourself: it’s only a movie”.

Guinea Pig represents the horror film in it’s leanest, meanest, stripped to kill sense, reduced to its bare essentials. Part of our appreciation of the genre is because we know it isn’t real, and it’s only this basis in fantasy that makes it acceptable; remove the cushioning support of filmic convention and we’re open to the body-blow of raw emotion. It’s not a film for the non-horror fan, and I can to a certain extent understand the reaction of Customs officers on seeing it, taken out of context. The film is more tolerable – and to some extent makes a lot more sense – when associated with the other entries in the series.

My first reaction on hearing about them was “Why?”, but many of the other entries have little in common with the notorious number two, though they are just as strange to Western eyes. One has a woman chased by a flying, pulsating heart, until the icky flesh gobbet is caught in a dustbin by a transvestite and another very bizarre film has a suicidal man discovering he’s immortal no matter what he does to himself. This resembles Tetsuo more than anything else – which may not be a coincidence, as the salaryman from said movie does appears in a further member of the series. 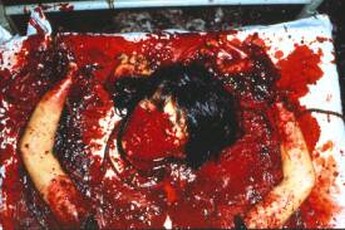 The problem with most articles on the film is that they have concentrated on the gore; this is understandable, as a) the gore is most impressive and b) the tape is unlikely to be released anywhere outside it’s native land and so no-one has gone to the trouble of subtitling it. However, the monologues of the Samurai provide essential insights into the ethics behind the film when they are translated. As the quote at the start suggests, he is an ardent admirer of beauty, although his appreciation is shown in a way which will perhaps only ring bells with fans of Dario Argento! Another key point is revealed in the following:

“Now the woman is in a state of rapture. Due to the drug I injected into her, as can be seen, she is completely unable to feel pain. But, instead of feeling nothing, she feels only ecstacy.”

This is a small but significant alteration to the attitude of the entire film; it becomes clear that pain and suffering are not the aim, in fact they are a positive barrier to observing ‘the flower’, which is the real objective. It’s very much an ongoing process:

“In this world, there is nothing more beautiful. I shall now reveal clearly the ideal of beauty. First the red flower shall bloom from her wrist. [Later: after some disembowelment] Finally, I shall pluck out the jewels. They are the most beautiful part of a woman’s body.” 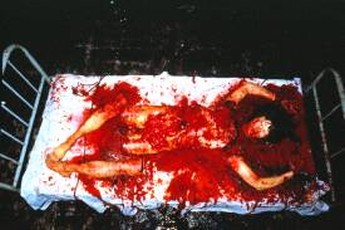 If we have trouble making sense of Guinea Pig, it may be because we are trying to impose Western values on a peculiarly Eastern product. It was not intended for international consumption, so should not be condemned merely because it adheres to very different moral standards. Guinea Pig can be seen as just another facet, an experiment in pushing the limits of the genre ever further. It therefore stands alongside films like Hammer’s versions of Dracula and Frankenstein, condemned as repulsive and obscene when first released. Time mellows all things: maybe, in 30 years time, we’ll be seeing Flower of Flesh and Blood on TV.

“Thus, this flower of flesh and blood has bloomed completely.”