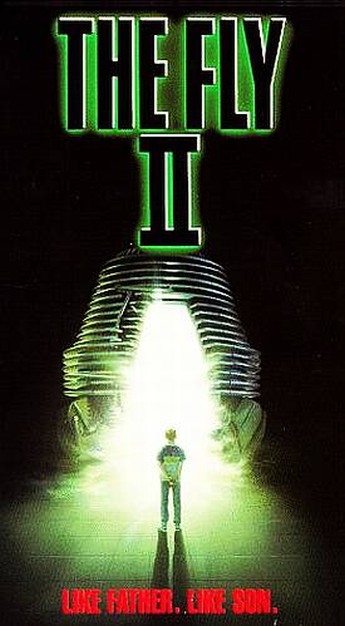 [2] While Life on the Edge showed that being a special effects man is no barrier to becoming a good director, The Fly II shows that it is equally no passport either. Not much of the blame for this ill-conceived movie can be laid directly at his door since the script, written by a committee judging from the credits, turns the gut-wrenching love story of Cronenberg’s original into a six-legged remake of The Incredible Hulk.

It begins with Brundle Junior’s (Stoltz) birth – he rapidly grows into a precocious brat at the hands of the Bartok Corporation, a multinational conglomerate. This series of scenes have little discernible point. He befriends a dog, only to have it go through his father’s matter transporter and come out the other side looking like a creature from Fraggle Rock. On his 5th birthday (he’s now fully grown), the president of Bartok Corp. gives him a home of his own and tells him about Brundle Sr. Bravely, son decides to take up where father left off, meets his love interest and decides that he doesn’t want to be an insect. But the Bartok Corporation are having none of it.

The last 30 minutes show heavy Walas influence as they throw special effect after special effect at the camera in a game, ultimately failed attempt to make this anything other than a Hollywood product. It’s straight-down-the-line goodies vs. baddies – none of the complexities of the original. The ending will rot your teeth. Cronenberg should sue.