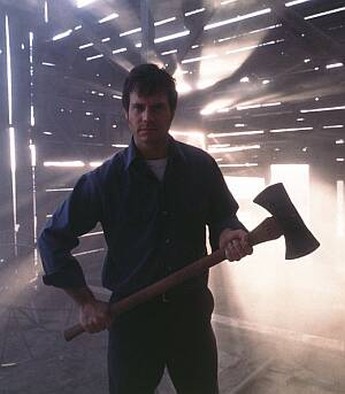 A remarkably assured directorial debut by Paxton, who treads with a fine balance in this American Gothic saga of the family that slays together. He also plays the father, visited by an angel who orders him to kill a list of demons…in human form. When he tries to bring in his children, the younger one goes along with it, but the older son (O’Leary – also excellent) tries desperately to stop the murders, torn between love for his father, and the realisation he’s a psycho. All of this is slowly revealed by the now grown-up son (McConaughey), to the FBI agent (Boothe) investigating the long-running string of deaths.

The middle is where the film loses its way a tad – all the major plot points are established, and the script seems to be killing time. Oh look, another “demon” is heading for a close encounter of the axe kind. Eventually, however, it gets back on track, with a grand finale that twists everything you’ve seen into other directions, making you question your own interpretation. Like The Rapture, it seems initially to be making a clear statement about religious belief, but by the end, you’re no longer quite so certain, with the script carefully skirting definite conclusion. Definitely one of those you’ll want to look over again, and see if the story-line makes sense in the light of subsequent events. For now, we’ll give it the benefit of the doubt.