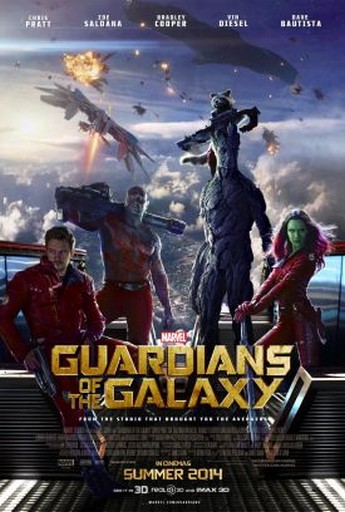 This good-natured romp through space is very much fun, make no mistake – but can I confess to being somewhat disappointed? So many people had told me how utterly fabulous it was, that merely being an entertaining two hours came over as a let-down. Visually, it was top-notch, with perhaps the most incredibly detailed alien worlds I’d ever seen, and the dialogue was particularly fun. But the story felt like it was an afterthought, with Peter Quill (Pratt), an Earthman abducted from our planet as a child, and his motley band of merry men, women, tree-like humanoids with limited vocabulary and a genetically-engineered warrior raccoons, scouring the galaxy for a McGuffin the bad guys intend to use for…

Oh, the usual bad-guy purposes, I imagine. Really, it’s just an excuse, and makes about as much sense as the glaringly incongruous selection of 70’s pop songs, shoehorned into the movie, apparently for no better reason than… I guess Gunn likes them? This aspect is too much like being trapped in a car with your older sister for two hours. However, it speaks to how good the other aspects are, that the film overcomes both the grating soundtrack and near-absence of any meaningful plot, to become a solid slab of cinematic chocolate, that often feels like a sly satire of the superheroic space genre, yet manages to avoid descending into repetitious parody. Quill and his supporting characters are a genuine pleasure to spend time with, even Rocket (voiced by Cooper), a CGI construct who, judging from the trailers, apparently had the potential to become this generation’s Jar-Jar Binks.

That fate is mercifully avoided, and if Gunn apparently hardly bothered to come up with a plot, it was perhaps because he was working so hard on the characters. As noted, the worlds created for the film are stunningly intricate, and you’ll often find yourself getting caught up in the depth of these, even as something explodes in the front of the frame. Every penny of the $170 million is up on the screen, and it beats The Avengers [which cost $50 million more] into a pulp. Left kinda wishing we’d seen it at the cinema now, for this is exactly the sort of widescreen, high-octane nonsense for which the theatrical experience was designed.