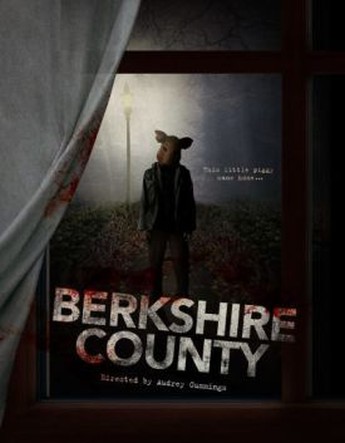 Kylie Winters (King) is already having a very bad day, after a video of her giving a boy a blow-job is making the rounds at school. Just another case, according to her mother, of Kylie not being willing to stand her ground, and letting herself get pushed around by others instead. She now has to spend Halloween night babysitting two young kids, in a remote mansion. But what’s going to happen there, will make being the laughing-stock at school seem like a picnic, as the house comes under siege by a trio of psychopaths, two adults and a child, in pig masks, who have opted to ignore the “treat” part of proceedings, and are hell-bent on adding Kylie and her charges to the collection of babysitters and the baby-sat, in the back of their van. If our heroine is going to get through the night, she’s going to have to dig down for some previously undiscovered strength of character and courage.

In terms of storyline, it’s fairly lean, drawing its main protagonists in quick yet effective strokes: once there’s the knock at the door, perhaps 25 minutes in, the movie largely doesn’t let up, with the heroine in varying degrees of peril over the next hour. However, what’s particularly impressive is the way Kylie still gets a genuine character arc, even as she’s running around the house, trying to hide, trapped in the back of the piggies’ van, etc. At the start she is, to be frank, a tad annoying – certainly the kind of easily manipulated person who, as my mother used to say, would jump off a cliff if other people did it. But, by the end, horrendously traumatic though the experience has been, she has become a much stronger character, capable of fending for herself to an extraordinary degree. The overall effect is somewhere between the original Halloween and Aliens; the latter is seen in the relationship between Kylie and the little girl, and in particular with a conversation about whether or not there are real monsters. “Not until high-school,” says the baby-sitter.

A couple of other aspects stood out: the film looks very, very luscious: it was shot using the Red digital cinema system, and is basically indistinguishable from a top of the line blockbuster, with very fluid camerawork, and is immensely assured for a debut feature. The house in which the first half takes part is amazing; if this is what homes in Canada (where this was filmed) are like, we’re moving there! To borrow a line from elsewhere, it’s a maze of twisty little passages, all alike, offering such a rabbit-warren of hiding place possibilities, that it’s almost a shame to leave behind for the second half. Not that it gets much less intense, and in total, you’ll find yourself frequently holding your breath, for close to an hour after things kick off. So you’ll get a good cardio workout, as well as everything else.