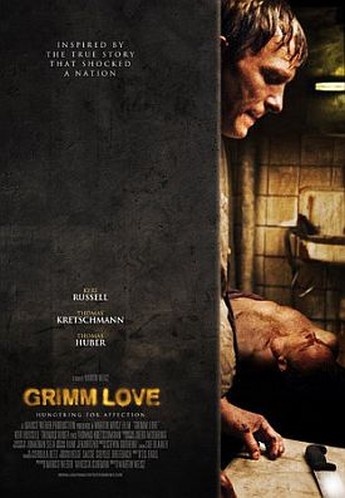 Armin Meiwes was an infamous German psychopath who met his victim online, killed and ate him. What makes the case stand out is that his victim was a willing one, who wanted to be eaten. It’s such a bizarre concept, and that’s where the film fails in its re-enactment of events. Despite a brave attempt, it doesn’t succeed in explaining what is, admittedly, basically inexplicable to those of us on the right side of sanity. It also is hampered by a clumsy framing device, which seems little more than a flimsy excuse to get a Hollywood name into things. Russell plays a graduate student, intrigued by the case, whose research leads to a lot of flashbacks depicting the life both of killer Oliver (Kretschmann) and his victim, Simon (Huber). As she digs deeper, she eventually is able to obtain a video-tape depicting the sequence of events that unfold as the two head towards their act of consensual cannibalism.

As noted, Russell is largely irrelevant, and the film would have benefited is she hadn’t appeared at all, as her character adds nothing in terms of our comprehension, and simply adds another layer of distance – sometimes we aren’t directly observing what’s going on, as much as seeing it filtered through her perception. The film does succeed in humanizing both murderer and victim: if it’s almost impossible to understand the decisions they make, Kretschmann and Huber play them as lonely and dysfunctional, yet not unsympathetic. For instance, when Oliver’s first wannabe meal changes his mind – while cocooned in Saran-wrap! – the cannibal frees him without question, something even lovable psycho Dexter likely wouldn’t do. Dump Russell, probe deeper into the minds of the two protagonists and the movie would have a better chance of lasting success, rather than providing merely a glimpse behind a disturbing curtain.