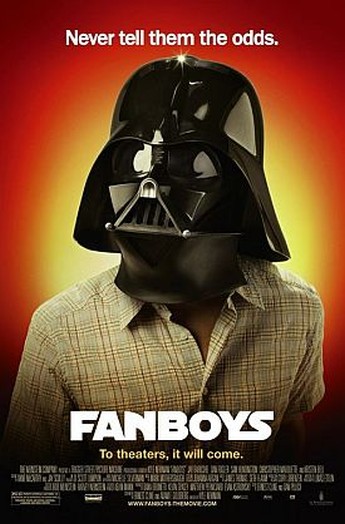 It’s 1998, with the release of The Phantom Menace looming on the horizon. Eric (Huntington) has drifted away from his three high-school friends, preferring to embrace a life as a car-saleman, rther than retain the comic-book and SF interests of the trio. But his worldview is challenged when he discovers that one of them, Linus (Marquette), has terminal cancer, and won’t live to see the release of the movie for which he has waited fifteen years. Along with Hutch (Fogler) and Windows (Baruchel), they begin a quixotic journey from Ohio to California, aiming to break into George Lucas’s Skywalker Ranch, so Linus can watch the film before its release. The road-trip will bring them into conflict with the rival nerds of Trekdom, a gay bar in need of entertainment, peyote-laced guacamole, a pimp with an interesting set of tattoos – and that’s all before they even get within striking distance of their final destination.

The easiest way to describe this is, The Hangover for geeks, and that’s an accurate comparison. We have a motley crew of friends, getting away from their everyday lives and embarking on an adventure beyond their wildest dreams, blah-blah, eccentric characters, blah, warm-hearted blah. Credit to them for taking the cancer subplot and handling it without sentimentality, but the overall impact of this is slight, at best. Star Wars fans will have an absolute field-day, with a parade of recognisable names, most obviously Carrie Fisher, Billy Dee Williams and Ray Park, and there’s a lot of non-Wars people who show up too, bizarrely including someone playing Harry Knowles [what, you mean you couldn’t lure the man himself to the set? I thought all that needed was a hot-dog on a string]. It does come over as self-indulgent and, really, Wars fans poking fun at Trekkers? While aimiable and generally amusing, only the final scene acknowledges the dirty little secret on which it founders: The Phantom Menace was mediocre, leaving the obsession portrayed here as misguided and incomprehensible at best.