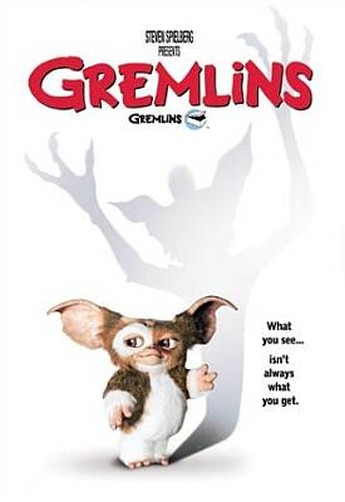 The subsequent arrival of the monstrosities known as Furbys has probably not been kind to this film, which does probably take too long to get to the meat of the movie: anarchy, chaos and destruction. Sure, Gizmo is cute, but that isn’t quite enough to sustain the first hour of the film, as the rules are carefully spelled out, and equally as carefully broken. Still, the human characters are not as irritating as they might be, though one wonders what Judge Reinhold is actually doing in the film – his character smarms his way through a couple of scenes, then vanished entirely. I do like the nicely-twisted approach to Christmas, which takes a Capra-esque American small town, and puts it through the wringer, courtesy of a pack of little monsters without any holiday spirit.

It’s only when cute mutates into vicious that the film gets going, with some great assaults, and Chris Walas’s special effects really letting rip. The glorious sequence with an entire cinema of monsters, entranced by Snow White is probably the most notable scene, though like most of those involving the Gremlins, it runs on beyond what’s necessary. Galligan’s Billy is a somewhat bland hero, and Cates is adequately perky at Kate, even if neither role requires much from them, beyond looking aghast at the ensuing carnage. However, Kate’s story about why she hates Christmas is every bit as much a marker for the festive season as any speech by Charlie Brown. Dante never quite found the success he deserved; this was probably the closest he ever came.