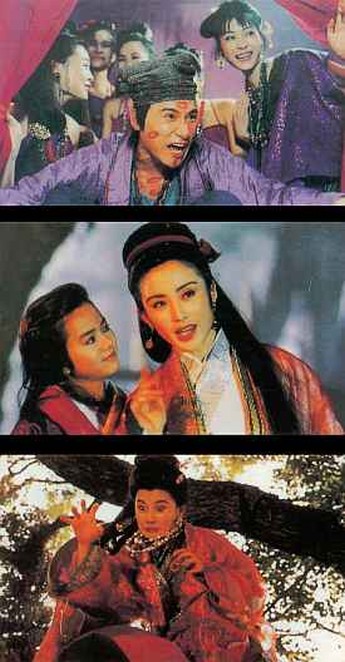 Wildly imaginative, and with a sly tongue-in-cheek style which keeps it healthily grounded, this is HK cinema at its most fun. Two pairs of bounty hunters, the Daggers (Leung and Jimmie Lin) and the Bewitchments (Man and Gloria Yip), initially are rivals to take in Nine-Tails Fox (Jackie Cheung), a notorious thief and sex-maniac who raped and killed a young girl. While they get their man, they’re forced to team up, and gradually discover things may not quite be how they initially appear. That’s merely a starting point for an escalating series of amazingly crazy, but astonishingly creative set-pieces, which may make no sense, but are undeniable fun to watch. Let’s just list some of the elements which all prove to be (more or less) necessary to the plot.

Anaesthetic flatulence; a flying four-poster bed; a severed hand with personality; a bad guy called ‘Erotomania Man’; another one called ‘Die With One Blow’; another one who can suck the hearts out of his enemies through their chests; inn-keepers called ‘Anita Mui’ and ‘Leslie Cheung’ (which has more poignancy now, given the early deaths of both stars); a rendition of That’s the Way (Uh-huh, Uh-huh) I Like it; a spiked metal bra; and a poison that turns you green and randy, the cure for which is, have sex nine times. Your pregnant partner will then give birth to a strange fetus in three days, that you must eat to complete the cure. Any questions?

It’s a blizzard of inventiveness, yet the cast are universally excellent, playing their roles with such gusto, they pull you along so you actually care for their characters. You have to be in the right mood, obviously, and this is probably not recommended for beginners in HK cinema, since it would be like snorting raw amphetamines. Viewing of this by untrained amateurs could cause their heads to explode. And that’s simply from trying to decode the woeful subtitles, or work out from where the makers stole the soundtrack [That’d be Death Becomes Her, A Fish Called Wanda, Heathers, and Quigley Down Under]. Those who know the films this mercilessly parodies, on the other hand, will probably laugh like drains at the cheap, lunatic brilliance with which this is over-stuffed.