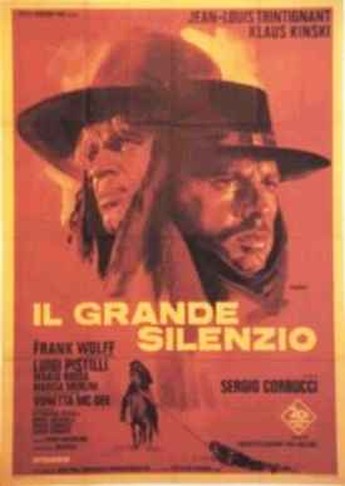 I’m trying hard to think of a more pessimistic, downbeat film. And I’m failing. This Spaghetti Western pits “bounty killer” Loco (Kinski) against hero of the poor and oppressed, Silence (Trintignant), a mute who, it turns out, has some scores of his own to settle. Also involved is the local sherriff (Wolff), and a group of outlaws who live in the mountains; it all takes place against the backdrop of an amazing snow-covered landscape, supposedly Utah, but in reality, the Italian Alps. This provides another possible level to the title: does it refer to the location, the hero or death, which lurks in almost every scene? Regardless, the results undeniably kick ass.

I think it’s the characters that make this work most effectively, with Loco a twisted creation, but one who works within the law. Silence, too, insists on never drawing first – but Loco knows this, demonstrated in a beautiful scene where he carefully avoids provocation. There are a couple of mis-steps towards the end: most notably, while much is made earlier on of the fact a gun must be warm in order to work, this is conveniently forgotten. The love-story between Silence and one of his employers is also unconvincing and ineffective (though any cinematic inter-racial affair is brave, less than 15 years after Rosa Parks refused to move to the back of the bus). However, the ending is just fabulous: you keep expecting it to turn one way, and it relentlessly goes in the other direction. Ennio Morricone’s score helps greatly, and it’s about as much an anti-Western as anything I’ve ever seen.