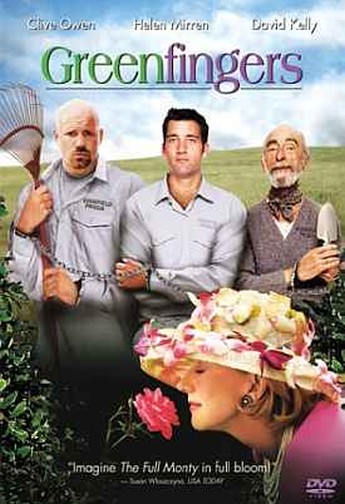 This is the kind of entirely inoffensive, feel-good romantic comedy which gave British cinema such a bad name a decade or two back – mostly thanks to Hugh Grant and The Full Monty – and which I hated with an absolute passion. It’s a genre that was positively run into the ground at one point; fortunately, eight years have elapsed since this came out, which helps reduce the sense of deja-vu. Owen plays introverted murderer Colin Briggs, given a chance at parole with a transfer to an open prison, where another lifer, Fergus Wilks (Kelly), shows him the delights of gardening – a pastime for which Colin turns out to have natural talent. The gardening squad of jailbirds comes to the attention of renowned floral expert Georgina Woodhouse (Mirren) and her daughter (Little), who senses that beneath the tough, sullen exterior Briggs exudes, is a delicate little blossom in need of affection.

I can feel my teeth rotting in my head, the plot is just so sugary: Wilks has a terminal illness; the convicts are, to a man, nice guys, despite their murderous histories; there’s the prospect of competing at a big flower show. You could churn out this kind of sentimental slop in your sleep, and I think that’s what happened here. Yet, the presence of someone like Owen manages to elevate the film and leave it marginally watchable, aided by good turns from Kelly and Adam Fogerty as Raw, the prison thug [Steve ‘Stone-Cold’ Austin would be a perfect candidate for any Hollywood remake]. Mirren is solid as ever, yet largely wasted, vanishing in the middle through an absurd contrivance of no purpose at all. Harmless though, which puts it a step or two above many other entries of the genre.