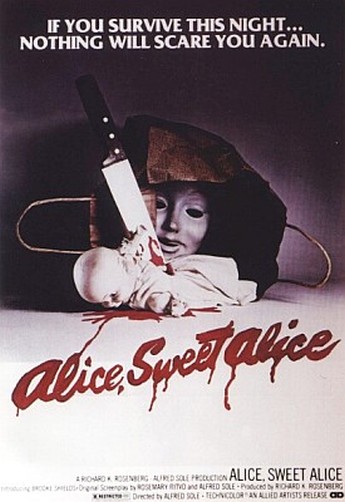 This initially looked more likely to be a “killer kid” flick than it eventually became, at first sitting somewhere between The Omen and Don’t Look Now, with someone in a yellow raincoat and mask burning, stabbing and hurling victims to their deaths. Suspicion falls on Alice (Sheppard), one of the daughters of Catherine (Miller): a strange little girl, who keeps cockroaches in a jar, and engages in odd, teasing conversations with the obese landlord. Her sister is killed at first communion, and when a visiting aunt gets stabbed in the leg, it’s off to psychiatric observation for Alice, despite her shrieking protestations of innocence. While there’s no denying she is astonishingly rude and completely self-centered, or that the world would be a better place if she was locked up and the key thrown away, does that make her an actual murderer? Or just a typical teenage girl?

When the truth comes out, it feels more of a cheat than a revelation and this section is where the film is on its shakiest ground. That’s in part because it comes on the heels of what feels like 30 minutes of incessant shrieking from the female characters, whose volume knobs all appear to be stuck on eleven. Not that this makes them all that less useful than the men: there’s a largely-absent father and an ineffectual priest as well as the paedophile landlord. This may explain why you’ll likely find yourself applauding their painful deaths, as and when they appear. However, once you adapt to the movie’s new direction [best summed as “loony religious fundamentalism”], then it’s actually not too bad, building to an appropriately mad conclusion. And the raincoat and mask certainly count as among the creepier props of slasher cinema.