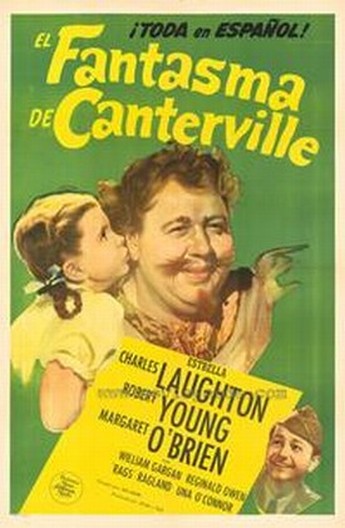 When you watch this, it’s amazing to think that the career of O’Brien – effortlessly stealing every scene in which she appears, even from the likes of Laughton – basically peaked at the age of seven. She plays Lady Jessica de Canterville, the young heir to the family castle, long reputed as the residence of England’s most famous ghost, Sir Simon de Canterville (Laughton). But when a platoon of American soldiers is billeted there [this being 1944], Cuffy Williams (Young) finds out, not only that he is a de Canterville descendant, but that the ghost is…well, a bit crap to be honest. Cuffy can free Sir Simon from his curse by showing bravery – however, his ancestors contain an unbroken line of historical cowardice for the past three centuries. Can he overcome this genetic handicap, and help “poor, tired Simon,” as Jessica puts it, find eternal rest?

O’Brien is simply amazing: the sequence where she tells the GIs the history of the apparition is acting at its best. That bubbling sound you hear is Dakota Fanning frothing at the mouth, wishing she were that good. Indeed, O’Brien may perhaps be too good for the rest of the film which, if amusing enough, does not stand the comparison well. Both Young and Laughton are pretty colourless – though given the latter’s spectral role, this is perhaps forgiveable. The storyline is a bit flimsy: Sir Simon has no problem swanning off to Occupied Europe to accompany Cuffy on a raid, so why has he stayed in the house for 300 years? The finale is particularly contrived, though the sight of Jessica kicking a large, German bomb is certainly surreal enough to be memorable, and there’s an unexpected, and surprisingly impressive musical/dance number in the middle. If you wanted to see two GIs jitterbugging with each other, this is the movie for you. The rest of us – likely the majority – will have to settle for marvelling at the moppet, and wondering who’d win if O’Brien and Shirley Temple had a fight.