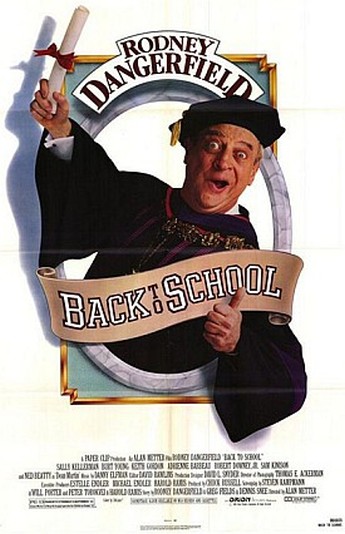 While some aspects of this undoubtedly creaking at the seams with age – the hairstyles are probably the worst offenders – there is still enough about this to make for an entertaining 90 minutes. Dangerfield plays Thornton Mellon, a rich slob whose son (Gordon) threatens to drop out of college; to stop him, his dad offers to join him. Needless to say, father’s brash approach to education [why study when you can hire people to do your homework?] rubs some of the faculty the wrong way, and drives his son to the brink of distraction. However, English professor Dr. Turner (Kellerman) sees the heart beneath the brash exterior, and helps Mellon appreciate the value of reading, rather than just waiting for the movie of the book. It all builds towards a gruelling three-hour oral exam [no, they actually avoid the obvious joke] after which Mellon must win the meet for the college’s dive-team with his unique “Triple Lindy” manoeuvre.

Yeah, it’s all ridiculous, painfully obvious and occasionally creepy, as when a 65-year old Dangerfield cavorts in the hot-tub with co-eds. You can’t really say he was acting, either; it’s basically the same persona as in Caddyshack or his stage shows. And yet…if you don’t laugh when Mellon says he’s donating his body to science-fiction, then you may want to check your pulse. Dangerfield is a complete loose-cannon, without whom things would collapse, despite a series of interesting cameos, including Danny Elfman, Sam Kinison and Kurt Vonnegut. Yes, the Kurt Vonnegut. [Edie McClurg, Dangerfield’s secretary here, would play his wife in Natural Born Killers – which also starred Downey] When he’s on-screen, the film has an anarchic, ‘anything can happen’ feel that is a lot of fun. Otherwise… Not so much.