This is the very definition of a slow burn. Indeed, it almost pays tribute to its Icelandic setting, by adopting a glacial pace in the first half. Matters there aren’t helped by a heavy, cloying atmosphere which weighs everything down, and a narrative that drip-feeds important information at a pace that is sometimes frustrating. But I found it worth sticking with, eventually delivering a satisfactory pay-off, equally befitting the bleak landscape against which things unfold. 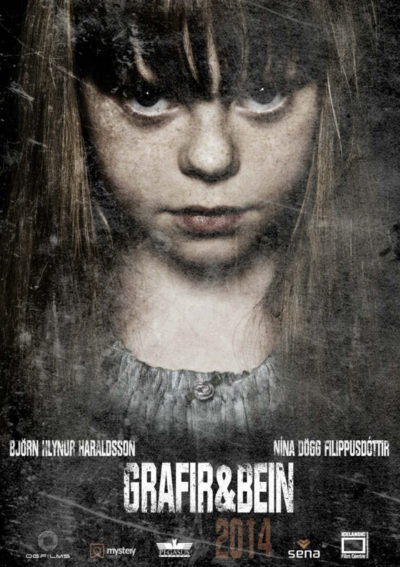 The central character is Gunnar (Haraldsson), a businessman currently awaiting the outcome of an appeal against a conviction for financial malpractice. Events have, it appears, already led to his brother’s suicide, leaving Gunnar’s young niece, Perla (Birgisdottir) orphaned. Gunnar and his wife, Sonja (Filippusdóttir), leave Reykjavik, both to escape the media circus and take care of Perla. Complicating the emotional situation, they lost their own daughter not so long ago. So far, so soap opera. But the longer they stay in the remote house, the more they are plagued by odd events. Perla speaks to unknown parties, and her pet cat goes missing. Gunnar is attacked by an invisible assailant. Sonja sees her husband and Perla outside, when he’s actually talking to the caretaker (Jónsson) in the kitchen. Turns out, this location has a history, and it’s one which has not finished being written yet.

This feels almost like an Icelandic version of The Shining. Both films drop a stressed individual into a place where the spirits are restless, and watch the resulting disintegration with a detached, almost clinical eye. Neither are warm movies, and the central characters are severely flawed. Gunnar is perhaps more sympathetic by the end, as the world eventually realizes he was right all along – but has paid a terrible price for the truth. Clearly, this is much smaller in scope, and replacing the Overlook Hotel with something closer to a B&B definitely feels like a downgrade. Haraldsson is no Jack Nicholson, either. Yet the restraint in his performance is effective enough, and Sigurdsson keep us experiencing things alongside the family. There’s no alternative point of reference from which we can observe.

The caretaker eventually spills the beans on the history of the house, which was built on the ruins of a family tragedy from decades before. Though he is rather more vague on what might have triggered their re-awakening at this particular (and convenient for the movie!) time; if I’d to guess, the suicide of Perla’s father? Anyway, it becomes increasingly clear that history is looking to repeat itself, and for the most part – except for the entirely expected failure of their car to start – this does a decent job of avoiding the obvious notes. Sonja’s affection for Perla proves key, and there’s a coda that proves Gunnar is not the last to suffer at the spectral hands from the past. I’m prepared to forgive its earlier trespasses: Graves proves it’s definitely better for a horror movie to start weak and finish strong, than the other way around.