Typical. You wait ages for a movie about psychologically fragile Scandinavian women, who move into new apartments only to be troubled by mysterious events, and then two come along at once. Earlier this month, we reviewed The Monitor, from Norway. Now, we find the next-door Swedes have their own entry in the genre. This is definitely not as effective though. When you open with a quote from H.P. Lovecraft, that sets up certain expectations, but the movie here seems largely uninterested in going anywhere beyond a fairly standard ghost story. It takes its own damn time getting there as well. You might want to fast-forward to the 58-minute mark here; what follows thereafter stands well on its own, as a decent horror short, and you won’t be missing much. 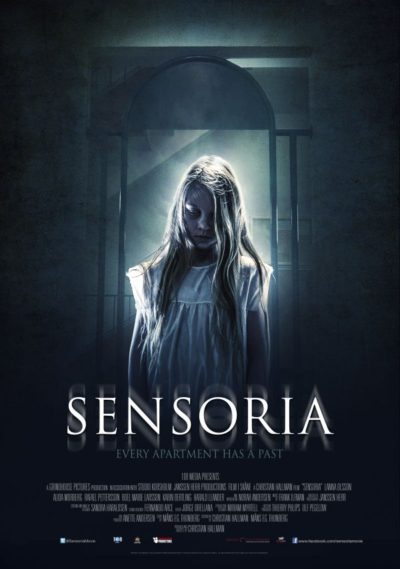 Caroline Menard (Ohlsson) is the new tenant in question, having got out of a fraught relationship to a small place of her own. However, the block of flats is populated by a slew of more or less weirdos, straight from central casting. The neighbourhood busybody. Creepy pervert guy. The blind man. But there’s also little girl My (Andersen), who’s staying with her grandmother and seems nice, and helpful. We know from the opening scene that Caroline’s apartment has a history. Exactly what that is, you’ll have to wait until those last twenty minutes to find out. Until then, you can expect lots of scenes of Caroline doing her laundry and other chores, along with some low-key spookiness like doors opening, and many, many shots of taps dripping.

I did like Ohlsson in her role. She has a downtrodden and world-weary look to her, which is perfect for the part – she’s considerably less glamorous an abuse victim than Noomi Rapace was in The Monitor. But Hallman has no apparent idea about how to generate more than the slightest bit of tension, and there’s precious little sense of development over the first hour. Oh, look: Caroline is putting some more boxes in the attic. I wonder if anything somewhat disturbing will be glimpsed in the background, unseen by her? Ah, there it is. I would also say the poster (right) is a spoiler, except that anyone with a pulse should be able to figure out how things will develop.

By coincidence, I watched this not long after we lost Richard H. Kirk of the band Cabaret Voltaire, whose arguably most famous song was called ‘Sensoria’. I’m not certain why Hallman chose the same title for the film, but I was kept amused by humming the Cab’s tune to myself during the slower sections. Of which there are many. Really, when an apparently possessed electric toothbrush is your effort at generating terror in the viewer, a re-think might be in order. They should have made everybody in the apartment complex dead, with the whole place a metaphor for purgatory. That might have justified the tedium present, up until the last 15 minutes before the credits roll.