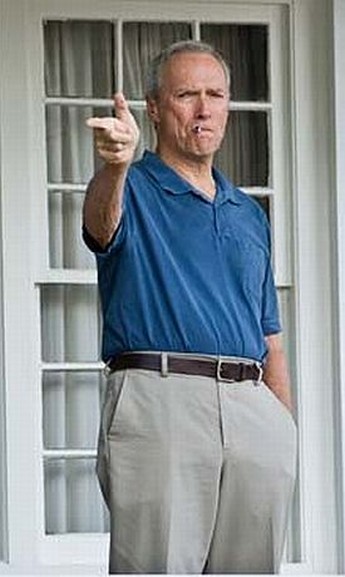 It was a surprise to me that Eastwood didn’t write the script for this as well, because his performance takes the lines and makes them his own, to an extent that it’s almost impossible to imagine them being said by anyone else. He plays the wonderfully irascible Walt Kowalski, a former soldier and ex-car worker, whose wife has just died. This leaves him alone, largely estranged from his sons and their families, and living in the middle of a neighbourhood which is now almost entirely immigrant – he snorts disapprovingly, as he sits on his porch, drinking Pabst Blue Ribbon. There’s an Asian family next door, who have problems of their own: the son Thao (Vang) is teetering on the edge of the local gang, despite the warnings of his sister, Sue (Her); his initiation is to steal Walt’s beloved 1972 Gran Torino. He is caught, but Walt is even less impressed by the gang: after running them off his property, he and the neighbouring family begin to thaw towards each other, with Sue finding the good within the grumpy old man, and Walt helping Thao find work and self-esteem. However, the gang are less than impressed by his burgeoning philanthropy and tolerance.

It’s a nicely balanced piece of work. The immigrants are shows as being both good and bad, as are the Americans. Even Walt is a mix: he drops terms like “gook” and “slopehead” but does so completely without malice, and to those he befriends, of any race, he is a fierce and loyal ally. Eastwood is brilliant here: it’s like watching Dirty Harry after retiring from the force, and he a marvellous character, into which he can sink his teeth. I can only aspire to be as passionately independent (shall we say) as Walt in my old-age, spitting out lines like, “Ever notice how you come across somebody once in a while you shouldn’t have fucked with? That’s me.” It plays like a tougher version of Up, in both of which a widowed man is forced to open up as the result of his relationship with an Asian-American kid. If the ending feels like a bit of a cop-out, it’s still a thoroughly enjoyable, positive rumination on the way American culture is changing, and how everyone can contribute to it, even those sidelined by mainstream society.