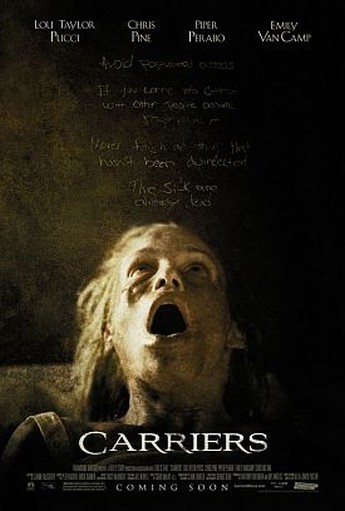 A viral epidemic has decimated the US, leaving few alive, and those who are terrified of the disease. Brothers Brian (Pine) and Danny (Pucci) are driving to the beach where they spend their childhood, with Brian’s girlfriend, Bobby (Perabo) and a friend, Kate (VanCamp) – they believing their destination to be the safest place to wait out for the plague to die down. When they run out of gas, they end up picking up a man and his infected daughter, and are diverted from their destination when he tells them he has heard that a laboratory has succeeded in manufacturing a serum which is effective against the disease. Reluctantly, they head off to check out the report, only to find it was a red-herring. Worse, Bobby is infected by the girl, though tries to hide it from the rest of their party. Her deception is revealed when they encounter a paramilitary group at a resort, who want to keep the girls for breeding purposes – until they discover her condition. But will Brian live up to his previously strictly-enforced rules about what to do with those who carry the virus?

Previously only being familiar with Pine through his role as James Kirk, this was a difficult character to get the brain around, because for the first half of the film he is not much more than an extremely unlikeable asshole. Not only does he not care about anyone else, he makes no effort to pretend otherwise. However, as things develop, it becomes clear that this is an approach born out of necessity, and is essential to survival: by the end, he and his brother are both having to make some very difficult decisions. The main problem is that the film doesn’t have much of a narrative thrust: the characters don’t possess a driving objective – or, indeed, an objective for their driving, and the results are thus largely aimless. There are some nice sequences, and following Bobby’s character arc does make up for some flaws, but the idea here isn’t developed in any way, and the resulting pace is mostly sluggish. Despite what you may think, it’s a drama, much more than it is a horror movie and the ending, which simply peters out without any real resolution, is an indicator of the main issues which…er, “plague” this.