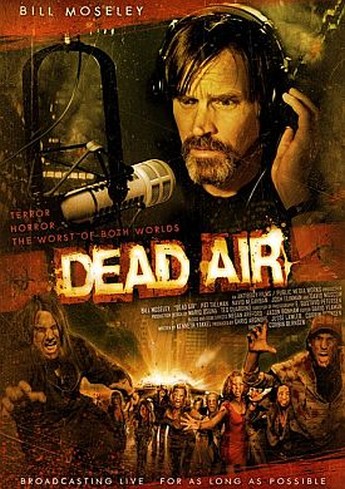 Isn’t it always the way. You wait forever to see a film about a talk-radio DJ in a studio besieged by zombies… And then two come along at once. Though this was actually made back in 2007, it sat on the shelf for a couple of years; now coming out in the wake of Pontypool‘s (albeit limited) festival release, it seems a little over-familiar, though getting left in DVD limbo isn’t its fault. As there, we have an acerbic DJ, Logan (Moseley), doing a talk-show in a near-deserted radio station, crossing swords with his producer (Tallman), when their bickering is interrupted by reports of mob savegery in the streets. It turns out to be the aftermath of one of a series of biological attacks by Muslim terrorists nationwide. One of whom is now inside the station and takes control of the station, intent on forcing Logan to broadcast misinformation, that will make the effects of the attack even worse.

Yes, if you ever thought “zombie flicks are fine, but they really need more religious terrorism,” then this is the movie for you. I suppose it’s an interesting counterpoint to the liberal dogma of Romero – look! They’re shopping! And they’re zombies! – but never manages to make any real connection between the two. As a result, the movie feels like two separate films, uncomfortably spliced together. Each on their own would perhaps be better, even though there isn’t too much to write home about on the zombie front: no particularly memorable kills or gore. As with Pontypool, the film is at its best when leveraging the uncertainty about the unfolding events: once it becomes clear exactly what’s happening, the script has little left to offer, and lumbers, with steadily-decreasing interest to the viewer, towards a conclusion that I can barely remember. More dead than air, that’s for sure.