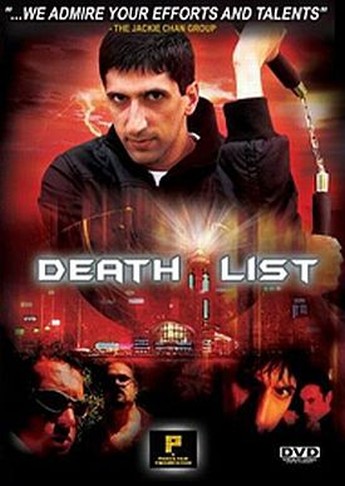 Coming in to this “cold”, i.e. with no real background knowledge, it took a little while to get a handle on Death List. At first, it seemed like a no-budget martial-arts movie. Well, actually, it is a no-budget martial-arts movie. But, it turns out, it’s intended to be tongue-in-cheek, with a dry, underplayed sense of humour that is quite appealing. At one point, our hero goes to a bar and asks for an ice-water. It turns up in a martini glass. He then starts bribing a guy for information, but ends up leaving with more money than he started with. It’s loopy little touches like that, which make this an enjoyable way to pass 65 minutes. The story is scant at best: Night (Paiaya) is a hitman who gets double-crossed and left for dead. He survives, but had lost his memory, and is trained in kung-fu skills by a master (Cheung), Kill Bill 2-style, so he can fight, this time on the side of law. Inevitably, this eventually – after a series of bone-crunching encounters – leads Night back to the man who betrayed him.

Chris came in during the middle of the movie, just in time to see the fight scene at the car scrapyard. which is one of the movie’s highlights. “Why is this guy not working in Hollywood?” she asked as it unfolded, and I do tend to agree. What I particularly liked was the editing – or, rather, the lack thereof. In an era where most cinematic fight scenes appear to have been edited by an ADHD four-year old with a weed-whacker, Paiaya is much more content to let things unfold at a pace that lets the viewer see and appreciate the participants skills, which are pretty good. Between those scenes, the cheerful (if occasionally cheesy) gore and supporting ninjas, you’ve got an entertaining piece of low-budget nonsense that largely eludes criticism, due to a clear sense it isn’t to be taken too seriously.

So what doesn’t work? Well, the scenes between the fights largely seem like an afterthought, and the film lurches from one scene to another with apparently little thought or explanation of what’s going on, where or to whom. A fair bit of the dialogue is dubbed, and it seems from what I’ve read elsewhere that Ara did a lot of the voices himself, which occasionally is just a stretch too far, and there are a number of scenes involving some (admittedly cool) cars that don’t go anywhere of importance. However, these aspect hardly detract much from the fun. I’ve a feeling that if we were to browse Paiaya’s DVD collection, we’d find a lot of titles that also sit on our shelves, and there’s an obvious passion gone into this, which makes us more than willing to overlook its flaws.