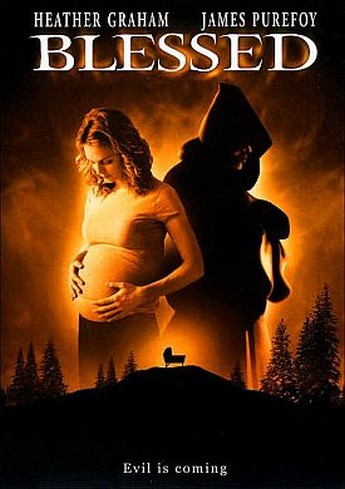 The only moment that will stick in my memory is one of the most inept attempts to show an Internet search engine ever. The text below the link says – and I am not making this up – “Some text from the web page itself, describing whatever it needs to describe.” That this placeholder somehow made its way into the finished product tells you all you need to know about the attention to detail in this limp update of Rosemary’s Baby. Samantha Howard (Graham) and her husband (Purefoy) are trying to have a baby, and end up in an upstate New York fertility clinic, where she finally gets pregnant. However, it turns out that the place is just a front for a large-scale conspiracy involving a vial of Lucifer’s blood, with the aim of getting Satan reborn on Earth so s/he can… Oh, the usual, I imagine. I dunno. The film is vague on the details. Probably involves the Apocalypse, I bet.

The problem is, the film establishes this very early, about the time the ultrasound machines starts growling: yet Samantha doesn’t become aware of the situation until…well, at all. No much how much ominous threat the soundtrack tries to add, the end result just isn’t very scary, and the feeble attempts to build a backstory for what is happening here, barely qualifies as even a token gesture. While none of them get to do much of interest, there are some decent genre names to be found in the supporting cast: unfortunately, it was Hemmings’ swan-song, as he died of a heart-attack during the filming [Insert obvious snarky comment here]. And the production values are also okay; there does seem to have been a decent amount of money put into this, even allowing for the cheapness of the Romanian stand-in for New York. However, the script fails miserably to generate any significant tension or interest; this one is basically still-born, with the last few post-natal minutes hinting at a sequel which, while never materializing, might have been a more interesting movie.