This is one of the few films where, once it was finished, I immediately went back to watch it all the way through again.  This caught me out as I wasn’t expecting to like it.

It is based on a book, which I normally take as a good sign as it hopefully means that the story was good enough to be both published and popular.  The tale is very well constructed with an ending that, unless you’ve read the book, I doubt that many will spot coming.

It involves Roy (McKellen) who is an energetically guileful elderly con-artist seeking that ‘one big score’, to fund a retirement of ill-deserved luxury.  Roy works with the avuncular, reassuring, and utterly trustworthy Vincent (Carter), joyfully scamming people out of as much money as they possibly can. 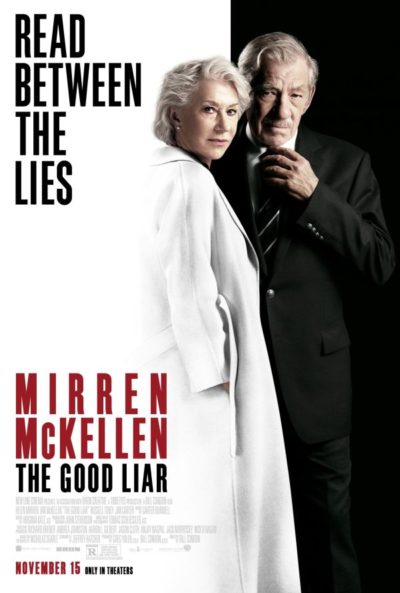 With one scam coming neatly to a conclusion Roy contrives to meet Betty (Mirren), a rather dull retired Oxford professor, and it becomes increasingly obvious that she is the near perfect target for his ‘final performance’ – as well as a comfortable retirement.  Sadly, the fly in Roy’s ointment is her sole grandson, the deeply suspicious and openly untrusting Stephen (Tovey).

The acting is absolutely first class across the board, which perversely almost seems to make the film feel a little pedestrian, almost flat.  And yet.  There are enough delicate and oh-so subtly nuanced moments to make you feel that there’s much more afoot here than meets the eye.  It’s odd, but first time through I was feeling quite uncomfortable.  For no reason.  And more than once I wasn’t sure who to be rooting for.  Nor why.

The film is nicely, crisply shot, sparing and lean, with music that is unobtrusive yet quietly supportive.  It also jogs along at a good pace with a fair few twists and turns, absolutely no filler, and with just enough layers at play to keep the ground continually shifting under your feet.

Now, in my reviews, I often don’t reveal much of the plot, mostly through being quite careless and lazy.  In this case however, all you have is all you’re getting, because the joy of this film is watching it unfold.  Now, of course you know that there is indeed ‘something’ coming.  It’s just that it’s not what actually arrives.  (Yes I know this seemingly makes no sense, but it will do afterwards.)

The ending is neat as well as satisfying, and the final unpacking of the ‘what’ and the ‘why’ is both precise and carefully done.

As you should have guessed by now, I heartily recommend this film, even if it’s not your type.  Everything about it is very good.  And do watch it twice.  It really is worth it.

“Secrets [are] between you, God, the Devil and the dead.”