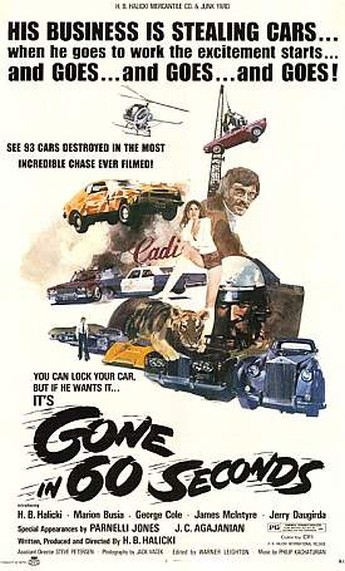 Maindrian Pace (Halicki) runs an insurance investigators, but also heads a gang of car thieves, who will steal to order. A South American druglord, gives them an order for 48 cars, and the team sets about filling their client’s needs. Things go more or less smoothly, except for the last car, an ’73 Mustang, code-named Eleanor. While Pace gets the vehicle, on seeing the police report, he realises the owner had no insurance, meaning the theft violates his (somewhat dubious) code of ethics. He knows where to find a replacement, but one of his colleagues, upset after Pace destroyed a car they stole which turned out to be full of heroin, tips off the police, who stake out the target. When Pace steals the Mustang, a pursuit begins. One that rampages through Los Angeles and the neighbouring suburbia. For about the next forty minutes.

Even though the stunts here are actually pretty prosaic by 21st-century terms, they are fully grounded in the real world, and that physicality gives them an impact, far more than any spectacularly-fake CGI can ever hope to muster. These are actual cars hitting each other at high velocity, and the results can only be respected. The rest of the film, however, is pretty poor, and you can tell most of those involved, not least Halicki, have little or no experience with movie-making: the background is confused, the performances almost non-existent and huge chunks of the dialogue appear to have been added later. Of course, complaining about such things is like criticizing the plot in a porno film, and it is true that the overall impact these issue have, is much less than in another drama. Truly a movie of two halves though, and overall, it’s still better than the remake.