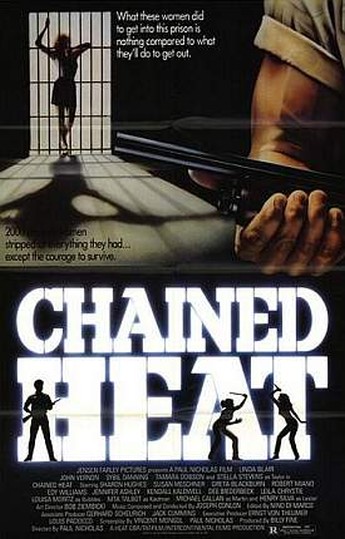 This lurid pic probably ranks up there, as among the sleaziest movies ever to star both an Oscar nominee (Blair) and a Golden Globe winner (Stevens) [Caligula is perhaps the only one that can beat it]. Blair plays Carol Henderson, sent to jail for accidental homicide, only to find she has fallen into a cesspool of drugs, sexual abuse, exploitation and violence. And that’s just the staff. Warden Bacman (Vernon) makes his own pornos in his jacuzzi-equipped office: if you had Monique Gabrielle to hand, you probably would too. While his underling (Stevens) oversees an operation that brings in drugs, and sends out the prettier inmates for work as party girls. The inmates, relatively, are straight-shooters – you know they’re scum – though racial tensions run high, between the white women under Danning, and the colored ones, seen over by the impressive Tamara Dobson [when you tower over Sybil Danning, you’re impressive – the late Dobson was 6’2″].

Pretty much every release of this has been cut to ribbons, with the violence edited down and the sexual violence all but removed entirely. It still remains a quite nasty piece of work, with the decent cast giving this a weight usually not found in the genre. The ‘party girl’ subplot is pretty ridiculous, however, and the riot which climaxes things only exposes the low-budget available; if the number of prisoners or guards ever reaches twenty, I’d be pretty surprised – the latter may explain why security inside appears to be non-existent, with inmates allowed to roam at will. Still, it has all the factors fans of the genre would expect, even in the censored versions: nudity, aggression, vengeance and unsurprisingly, little in the way of active rehabilitation. All completely ludicrous, of course, but as anyone who’s seen semi-sequel Red Heat knows, it’s far from being the worst entry in Blair’s chipmunk-cheeked filmography.