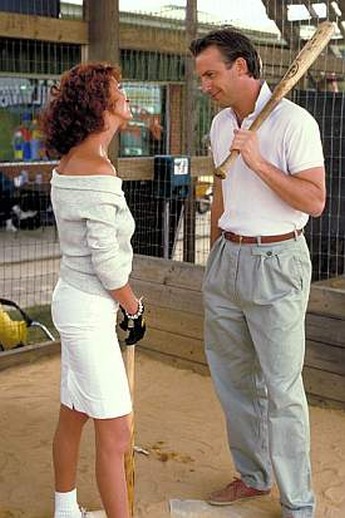 It took me a long time to get round to watching this, and even longer to work out what the title means: a type of tobacco that used to be made in the North Carolina town, and presumably inspired the name of the small-town baseball team on which this is centered, the Durham Bulls. They take delivery of two new players: one, rookie pitcher ‘Nuke’ LaLoosh (Robbins), a man with “a million-dollar arm and a five-cent head,” the other a veteran catcher Crash Davis (Kevin Costner), sent there to get LaLoosh’s head straight. He is helped – or not – in this by Annie Savoy (Susan Sarandon) who is part-groupie, part-unofficial coach to the team. She sleeps with one team member per season: initially, LaLoosh, tying him up on their first date, albeit only to read Walt Whitman poetry to him [the only way you’d get me to listen to Whitman too]. However, as the season wears on, she finds herself increasingly attracted to Davis, who initially spurned her, saying he was too old to have to ‘try out,’ as she demanded. It’s the love triangle between them that is at the center of the film.

And, to me, it’s the biggest weakness. While not denying Savoy has a certain odd charm, mixing intellect and carnality, it just never seems plausible that pro sportsmen would be attracted to her. I’m entirely with Davis when he says, “Why do you get to choose?” Like him, I’d have left; only, I wouldn’t have come back. The baseball aspects are much more successful, probably helped by the fact that Shelton was a minor-league player himself. The relationship between the gauche yet talented rookie and the wily veteran who has forgotten more about the game than most of us will ever know is expertly-drawn. You get a real sense of the characters and the thought-processes which go on, even in a single at-bat. It’s often laugh-out loud funny, such as the meeting on the mound that degenerates into a discussion of acceptable wedding gifts. and is eminently quotable, most famously Davis’s speech when Savoy asks what he believes in. It’s utterly scripted, but no less marvelous for that. When movies about the sport often tend towards the physical (Major League) or spiritual (The Natural), this is certainly among the most intellectual of baseball films, and as such deserves a significant amount of respect.