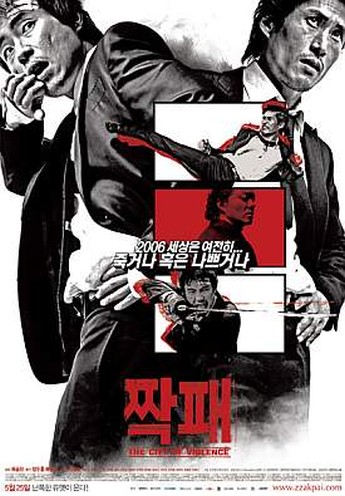 When his old friend Wang-Jae is killed by some punks, detective Tae-Su (Jung) returns home from Seoul to attend the funeral. There, he teams up with another childhood buddy, Seok-hwan (Ryoo), to track down the killers. However, it seems to be more than a random act of violence, and that a third in their high-school group, Pil-ho (Lee) may have been involved. He is now not the kid he used to be, having turned into a gangster, and is taking part in some shady land deals, to bring a casino to the provincial city. While he and Wang-Jae had stayed in the town and been friends for most of the two decades since, it appears they may have had a falling-out shortly before the fatal incident. Tae-Su uses his detective skills – along with some less conventional policing abilities, revolving around the kicking of ass by himself and Seok-hwan – to find out the truth.

To be honest, most of this is pretty dull. The expected “roaring rampage of revenge” promised on the DVD sleeve [the BBC’s Jonathan Trout, shamelessly plagiarizing the tagline for Kill Bill – which in typical Tarantino style, was stolen from the 1972 flick, Bury Me An Angel] singularly fails to materialize except for two rather good scenes. In one, a pedestrian precinct turns into something out of The Warriors, as our heroes have to take on multiple gangs of different styles. The second has them going to a restaurant to extract revenge on the man who killed their friend – only, they have to go through a near-endless stream of minions to get there, leading to one great moment, when the doors open up off into the distance. The look on Tae-Su’s and Seok-hwan’s faces at that moment is priceless. Otherwise, however… Not so much fun; the style Ryoo the director brings is occasionally impressive, but the flashbacks aren’t as interesting as he thinks, and neither the performances nor the story stand out. I suspect Ryoo might have a better career as a director than an actor.