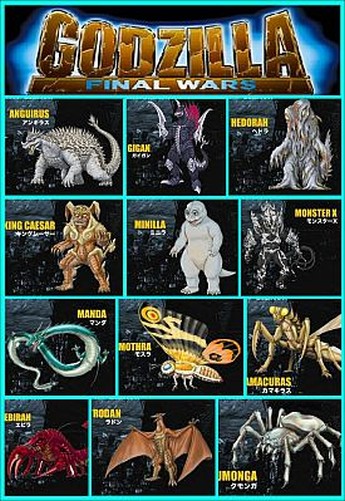 While certainly not a “traditional” kaiju flick, this is thoroughly entertaining nonsense, providing you’ve got a broad enough sense of appreciation to enjoy a mix of martial arts and city-mashing. At some point in the vague future, the Earth Defense Force has been set up to handle the monsters which periodically threaten centres of population; their staff includes a number of mutants with special skills that help deal with the threats, such as by burying Godzilla under a mountain at the South Pole. A sudden epidemic of monsters is solved by the arrival of the Xilians, apparently benign aliens. However, some of the EDF, such as leading solider Ozaki (Matsuoka) and molecular biologist Miyuki (Matsuoka), don’t trust the new arrivals. And with cause, since it turns out the Xilians were not only responsible for the attacks, but view Earthlings as food, not friends. When their plot is exposed, they unleash the mosters to destroy Earth civilization. There’s only one hope for mankind – and it would currently be lying buried beneath a mountain at the South Pole.

At 125 mins, it is overlong, most likely as the result of Kitamura trying to cram too much in – let the record show that Chris had fallen asleep by the climactic final battle [it had been a long day, in her defense]. I had no such issues, and never found it boring. Marking the 50th anniversary of the series, the second half is basically an all-star gauntlet match for Godzilla, as he travels the world, kicking the ass, with a welcome assist from Mothra, of just about every monster from those previous five decades. That’s both known (Rodan, Gigan) and obscurist (Kumonga); amusingly, the opponents with whom the Big G cleans house, included the version from Roland Emmerich’s US flop. However, this didn’t help the film at the Japanese box-office, where it got the smallest attendance for a Godzilla movie in close to 30 years. I enjoyed the off-the-wall stuff around the edges, and Kitamura brings much of his same bravura style to the violence, as in Versus. Not your parents’ Godzilla film, certainly, yet I still found it highly entertaining.