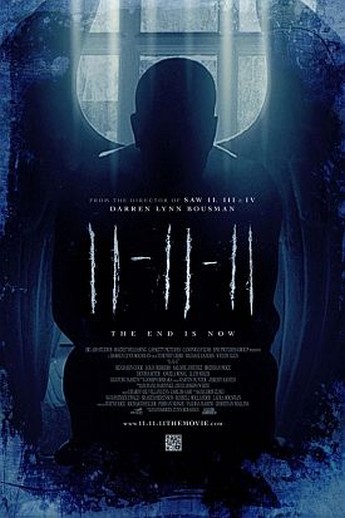 Successful author Joseph Crone (Gibbs) loses all faith after his wife and child die in a fire, and struggles as to whether or not to continue his writing career. He gets word his father is dying, and returns to Barcelona, where his estranged brother Samuel (Landes), a paraplegic priest, is on death watch at the house/church where they live. There’s weirdness going on, with the CCTV picking up strange figures that appear in the mist outside the house at 11:11pm, and this adds to Joseph’s unease, as those numbers have been falling into his life with increasing frequency over the past few days, as the titular date is approached. Searching online [whatever did we do before Google?], he finds a network of believers who think “something” will happen on that date, with a gateway opening between this world and another. What will make use of that opening, and whether it will be good or evil, seems in question. Despite his crisis of faith, Joseph becomes much more convinced than his brother of the importance of the impending date. What’s unquestionable, is that Samuel’s life is in danger, with attempts on the preacher’s life, interpreted by his brother as part of the apocalyptic plan.

I guess what I’ll take away is that electric light doesn’t appear to have made its way to Spain, as the house where most of this takes place appears the most badly-lit home I’ve ever seen, with Joseph rarely, if ever, pausing to reach for a light switch. Sarcasm aside, this is okay, though watching it on November 13th probably robbed it of power. Gibbs’ arc from atheist to apocalypse-proclaiming loony is nicely-handled, drawing the viewer along with him, though the woman who follows him to Barcelona had Chris (rightly) yelling “Stalker!” at the screen about the second time she showed up. Bousman does a nice job of generating atmosphere and there are no shortage of creepy moments as things progress towards…last Friday. However, as with most such entries, the payoff is rather less than the set-up, despite a dark twist on expectations. While I didn’t see it coming, this is likely due more to the fact that the film never quite grabbed me, to the point where I was paying sufficient attention to spot it.