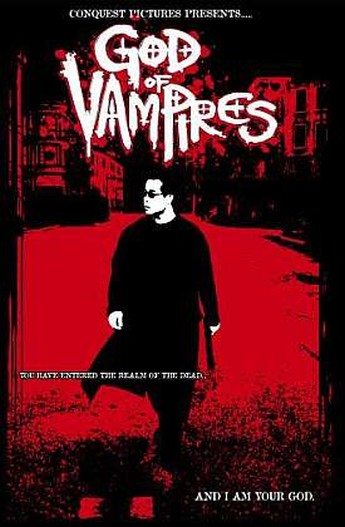 Fitz’s horror/action film has acquired something of a legendary reputation, not least because it was six years in the making, entirely in the spare time of those involved, basically as the opportunity and resources presented themselves. That’s dedication to the B-movie cause, without a doubt. Contract killer Frank Ng (Lim) finds out he has taken on a bit more than bargained for with his latest contract – because the target is Chinese vampire lord Kiang-Shi (Thaerakulsit), who is none too pleased by Frank’s attempt, involving as it does decapitation among other things and retaliates by taking out…oh, everyone Frank knows. Fortunately, Frank has a useful resource, Uncle Ping (Wang), who runs his restaurant pretty badly, but is basically the Wikipedia of Chinese folklore. He knows what needs to be done to slay the evil bloodsucker and stop his minions: it involves dismemberment with a blessed weapon, magic and, for the first time in cinematic vampire history… Crosses? No. Garlic? Vastly over-rated. Try an ink-jet printer. And so, Frank, Ping and a few of their buddies, head off to tackle Kiang-Shi in his lair, and paint the walls arterial red with the blood of evil.

It’s a strange mix of two Hong Kong genres, combining mysticism and magic with heroic bloodshed, yet is none the less enjoyable for that. There’s are some delightful moments of invention resulting from the culture clash – the ink-jet printer is only one of a number of such; see also Frank suggesting that it might speed up things if the blessed weapon was a chainsaw. I’m also astonished by the decent continuity given how long the creative process was: there’s not much way to tell it took six years to make. If there’s a weakness, it’s probably mostly in a sound mix that often renders the dialogue inaudible. I could literally not make out a word Kiang-Shi said, and at other times, the audio track all but drowns out the actors. Still, it’s hardly what you would call a voluble movie: Frank is very much a man of action, and that’s for the best, since the performances here are a bit variable; you can tell that Wang is the only actor with real experience. It might benefit from ten minutes being trimmed out here and there – the final battle does seem to go on too long, especially since it’s mostly in darkness – yet kept us amused and entertained. Hopefully it’s won’t be another six years before Fitz gives us his next feature.