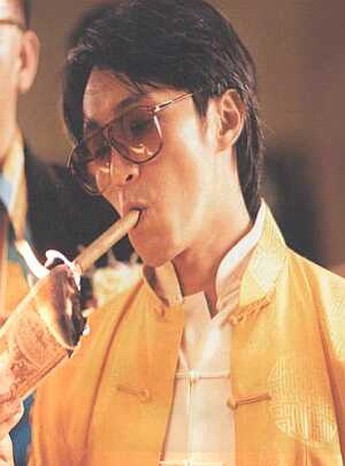 The first third of this is kinda hard to watch; I’m so used to seeing Chow playing someone who starts off down on his luck, that it’s almost disturbing to see him play an arrogant bastard. His chef is rude, smug, filthy rich and…that’s about all you get in the opening reel. Luckily, the inevitable fall from grace happens, at the hand of rival Kok, and Chow must build his career anew. This is where the film really starts, and he teams up with a super-ugly street vendor (Mok, another great performance underneath some truly unpleasant make-up) to restore his fortune.

In order to do so, they come up with a dish called – and I checked this up. Twice – Explosive Pissing Beef Balls. Not just a food, you can also use them for playing table tennis; predictably, they become a craze, which leads to the equally inevitable cook-off between Chow and his nemesis. After the slow start, the rest of the movie is full of the lunatic inventiveness for which Chow is renowned, not least a running joke which has him getting thrashed repeatedly by the 18 Bronzemen of Shaolin. The climax ranks up there with Love on Delivery in the Chow Hall of Fame, sharing a similar structure, of action intercut with flashbacks to training. All this and the use of folding chairs as a martial arts weapon – whatever else you can say about this film (such as it falling about 20 minutes short of greatness), it’s not deficient in inventiveness.