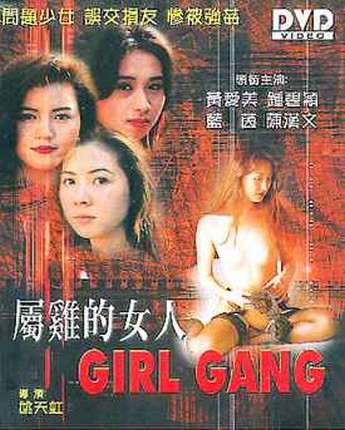 In some ways, this has the feel of one of those ‘moral’ films from the 1930’s with titles such as Sex Madness, in its cautionary tale of Michelle and Yim, two schoolgirls who fall in with the wrong crowd. To be specific, that would be Amy who, courtesy of her boyfriend, a low-level triad member, who has a life of fashionable clothes and leisure. Yim in particular aspires to this, and hangs out with Amy, while Michelle – the ‘good’ girl’, opts to stay away, after being warned off by her brother, who conveniently enough is a policeman. Turns out to be spectacularly-correct advice, because the free ride Amy has been enjoying is about to come to an end, since her boyfriend has been grooming both her and Yim for his stable of whores. Michelle wonders what’s up with her friend, but it’s not until she sees Yim outside a seedy motel that she realized what’s going on. Her cop relative mounts a raid and rescues Yim, but the pimp, unhappy with his business being disturbed, kidnaps Michelle for revenge.

Much like the aforementioned ‘moral’ films, this also goes into a lot of specific details about exactly what the results are: in this case, meaning a lot of long, fairly explicit [at least Skinemax standard] sex scenes, as Amy and Michelle service their patrons. Though, in the interests of honesty, I should say they usually appear to be enjoying these bouts a good deal more than such professionals generally do. Unless they’re really good actresses…and the dramatic scenes show little evidence of that, though the sequence where Michelle is assaulted has something of a creepily sleazy edge to it. Overall, however, it just isn’t one thing nor another: it needs better performances if it’s to be taken seriously, or go startlingly over-the-top if it’s to become a Category III classic. Instead, it’s just a B-quality pot-boiler, with little to distinguish it from others of its ilk.