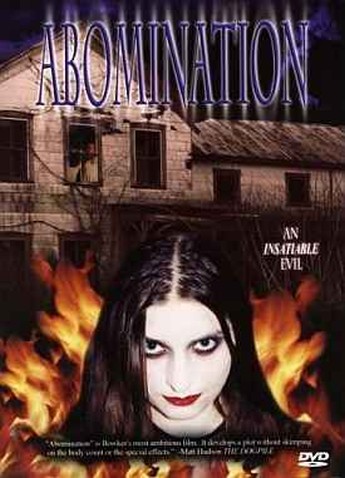 Sometimes, the title is the review. It’s been a long time since I’ve handed out an F – more than five years since Blackenstein, for I do not give out such things lightly, any more than I give out A+. However, there is really no other rating possible, for this is certainly among the ten worst movies I have ever seen. Matters are not helped by this being a sequel to a film I’ve never seen, which I presume explains the copious b&w flashback footage. However, even on its own terms, this is awful on every level. It’s shot on video – this, in itself, would not necessarily be a problem, except the video here appears to be a low-end camcorder, because, boy, is it grainy. The audio mix is just as bad, with the dialogue often inaudible or muffled. However, this is often a relief, as it saves you from some of the most awful, flat performances ever. They’re so painfully straining, one wonders if the entire cast was constipated – not least because the end product is the same, a steaming pile of crap.

Then there’s the “story,” with quotes used advisedly. Kathy (Wetherell) is attempting to uncover the truth behind her goth sister Rachel’s (Pandolfi) disappearance, and how it connects to a deserted house. She goes there with an ex-cop (Wilmot) who, in the most idiotic use of homosexuality as a plot device ever, turns out to be gay. Other people show up too, mostly for the sole purpose of getting killed, though the special effects here are in no way special, and barely qualify as effects. And after 70 minutes, mostly spent creeping around the house [though the cop may set a new record for most times knocked out in a movie], the resolution would merit a failing grade and “must try harder” comment from your primary-school English teacher. I have immense patience for Brain Damage Films, who put out horror movies no-one else would touch, including little gems such as the lurid Terror Toons. However, there’s a reason no-one else would touch this, and the world would likely be a better place if BDF had followed suit.