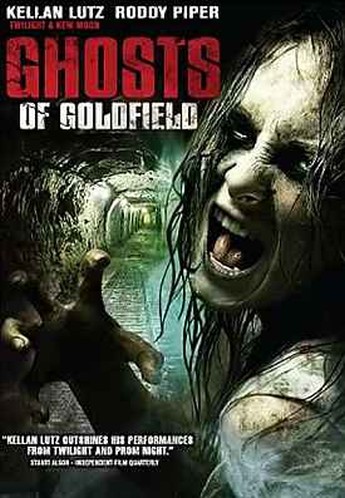 The inevitable touchstone for any film involving a small group of people stranded in a very large, probably haunted hotel is The Shining. It’s a very tough bar to match, since few directors are Stanley Kubrick, and equally few actors are Jack Nicholson – Winfield and Patterson certainly are not. Patterson plays Julie, a student doing a thesis on ghosts, who gets four of her clichés friends to form a film-crew and shoot inside a deserted hotel in Goldfield, Nevada, the despite the warnings of a local barman (Piper, reliable as ever). Turns out the place is occupied by the spirit of Elizabeth, a ‘kept woman’ from decades previously who, along with her baby, was killed there by a jealous lover, and now wanders the corridor looking for her child. It’s not long before the spectre is stalking the students, and it becomes apparent that Julie (and, indeed the barman) have a more personal connection to previous events than she thought.

It is, of course, complete nonsense. There is much discussion about this being one of the seven portals to the other side – yet Elizabeth is the only ghost to show up. It’s particularly talky in the middle section, and since none of the students are anything in the way of memorable characters, this drags horribly, not least since we worked out where this was going long before the Scooby Gang realized it. There is a surprising amount of gore, more than most ghost stories, even if the scripts leaves too many questions inadequately answered, and outside of Piper, the performances don’t stick in the memory either. That’s probably the film’s main problem: I watched it less than 48 hours ago, and struggling to come up with much to say about it, positive or negative. “Forgettable” seems the best word for this, and not even the ‘based on true events’ pre-title (yeah, sure…) can’t change that.