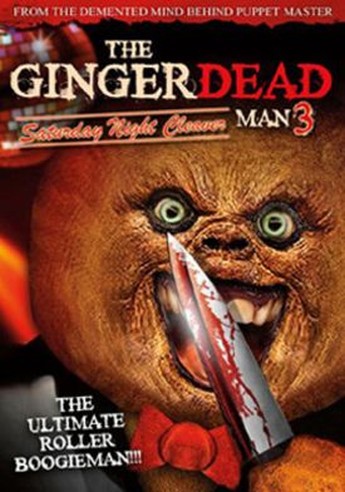 Well… At least it’s something different. Having enjoyed part two far more than I should admit, this third installment goes even further into the meta-movie stakes, being largely a homage to Carrie. How it gets there is by having the titular cookie escape from the Scientific Research Institute for the Study of Homicidal Baked Goods, in what’s an obvious homage to Silence of the Lambs. find a time-machine and leap back to a roller-rink in 1976, which is about to be closed by its owner Trixie (Fuher) for property taxes, but is going out in a blaze of glory by crowning its queen one last time. The reigning champion is uber-bitch Tammy (Pfeffer), but she faces a threat from Trixie’s niece, Cherry Wright (Wagner), an introvert who has, of course, certain hidden powers. Meanwhile, the Gingerdead Man is running around, slaughtering anyone who gets in his path with nailguns, hydrochloric acid, etc. But, of course, “Clarissa Darling” is on his tail, and she’s brought some even more psychopathic friends with her.

While there are many, many flaws to be found here – shaky performances, dodgy period continuity, limited production values and a script that, too often, thinks restaging scenes from far better movies is sufficient to pass for wit – this is never actually dull. There are probably as many moments when we laughed with the film, as at it, though I’m not sure what category the instrumental versions of era classics like White Rabbit fall, or the heroic Adolf Hitler. I’m not making this shit up. On that basis, I am inclined to give it a passing grade, simply because this is fully aware of its faults, it just doesn’t give a damn about them. A bigger problem is, it can’t decide whether it wants to be a relatively serious horror flick, or simply trot our parodies of other films. Trying to straddle the fence just doesn’t work, but if you watch only one movie about…well, you know how the rest goes.