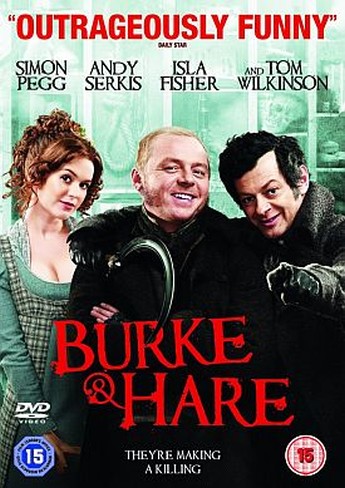 It has been almost 30 years since Landis directed any feature remotely in the horror genre, with Innocent Blood – though many would say Blues Brothers 2000 was certainly horrible. This tells the story of the two titular bodysnatchers (Pegg and Serkis respectively), who find a lucrative living procuring corpses for medical professor Dr. Knox (Wilkinson), only to turn to murder when the supply of natural deaths runs dry. It certainly could be horror, but Landis throws too many other plot elements in to the mix, as if uncertain the core elements will hold your interest. So, there’s Burke’s dalliance with an actress putting on an all-female version of Macbeth; Dr Knox’s rivalry with another surgeon, and their competition for royal patronage. A local crime boss, who wants in on the action. A French inventor who has just come up with photography. William Wordsworth. Stunt casting, including Christopher Lee, Jenny Agutter, Stephen Merchant, and so on.

It doesn’t help that Pegg, in particular, exudes absolutely no menace, coming over like Shaun with an Irish accent – he’s simply far too nice to be a murderous grave-robber. Serkis is better, projecting an air of definite sleaze, though even this is largely undone by his wife being Pegg’s flatmate from Spaced. Ok, the same actress, but it’s too hard for the audience to put aside the past: one wonders whether the original casting, which had Dr. Who – sorry, David Tennant – in Serkis’s role, would have been better or worse. There are some pleasures to be had here, with most of the supporting performances solid, once you get past the overly-familiar paces. But the film is neither dark enough for horror, nor funny enough to be comedy, and ends up a largely unsatisfying melange that doesn’t work as either. Probably a good thing Landis stayed away from genre pieces for so long.