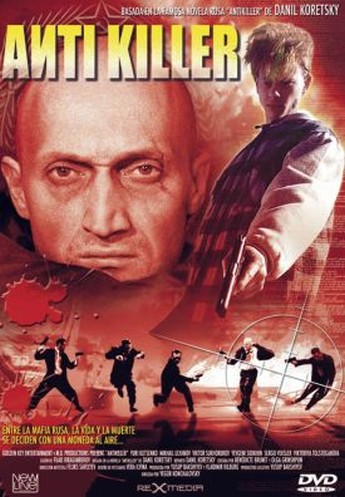 Disgraced cop Fox (Kutsenko) gets out of jail, where he was sent after evidence of his “forceful” interrogation techniques were used by his enemies and corrupt colleagues. Things on the streets have got worse since he went inside, with criminal gangs battling for control through a decaying urban landscape, with absolutely no concern for innocent bystanders. But Fox has got his own concerns: taking down Shaman (Baluev), one of the many mob bosses out there, but the one who was behind Fox’s incarceration. Fox also has to deal with the remarkably psychopathic Ape (Sukhorukov), a low-level thug who has been on the rise, since a brain injury left him unable to feel pain.

That synopsis only scratches the surface: there’s an awful lot going on, to the extent that I wonder whether you need to have read the popular Russian novel on which the film was based. Either that, or some kind of scorecard would have helped to keep track of things, especially in the early going, where the relationships between the characters are murky at best. One also wonders why Shaman appears to be channeling Marlon Brando shamelessly. I particularly liked the grubby cityscapes, which depict modern Russia as a hellish landscape of rotting industrial blight, bordering on the post-apocalyptic. Fox is also a good anti-hero, and I’d not mind seeing more Russian movies about organized crime. But at close to two hours, the film is in desperate need of better focus and direction, especially early, when it seems to set up several storylines, which then peter out. Any audience unfamiliar with the source material and setting will likely join me in a former Soviet state of confusion.