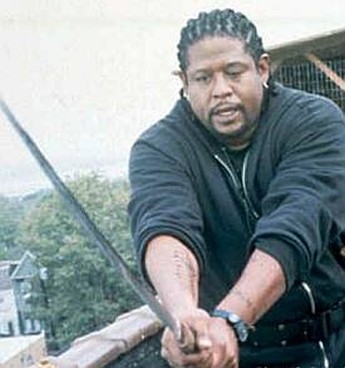 Somewhere between Le Samourai and Leon lurks Jarmusch’s latest off-kilter film, another direction change for a man clearly not bothered by commercial concerns. Whitaker is a black Mafia hit-man (yeah, we’re already suspending that disbelief) who lives his life by ancient Japanese codes of honour, and uses carrier pigeons to communicate with his boss, to whom he owes his life. When his employers turn on him…well, you can probably guess the rest, though this meanders along some interesting side-roads involving books, Haitian ice-cream vendors, Mafiosi with a fondness for gangsta rap, and a host of other weirdness.

Perhaps too much, as the film does topple into self-indulgence occasionally, though never for long. Whittaker combines soft emotion with physical presence, and is an ideal choice, as are the likes of Henry Silva on the mobster side. Ghost Dog’s relationship with a young girl reminded me very much of Leon, but if you’re going to steal, you might as well do it from the best film of the 90’s. Sadly, it looks like straight-to-video beckons, at least in the States: cinemas must be too busy with Pokemon: The Movie…