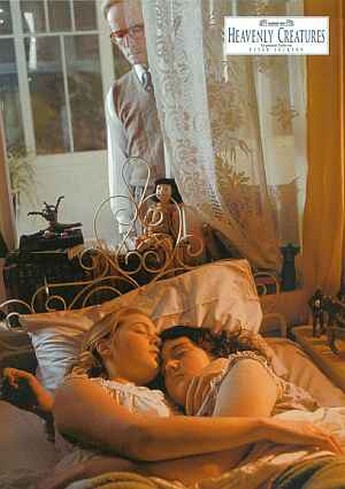 Jackson’s first attempt at “proper” cinema – no vomit-drinking, psychotic hippos or lawnmower splatter – tells the true story of two teenage girls (Winslet and Lynskey) who plot matricide rather than be separated. The film starts off with the killing, then goes back to prior events, right from the girls’ first meeting, making for an interesting, but not entirely successful, attempt to deal with a story that’s well-known, especially in New Zealand. The problem is, if anything, Jackson is too successful: the relationship between the girls is drawn so expertly and fast, that you then spend much of the second half waiting for the other shoe to drop, dramatically speaking. The film makes its points too fast, and then is left drumming its fingers in the third act.

Still, it’s a great piece of forensic psychology, convincingly portraying the obsessive nature of fanatical devotion, and the fantasy scenes in the girls’ imaginary world of Borovnia are quite breathtakingly executed. Jackson’s restraint with what could have been cheesy exploitation is admirable, aided by performances from Winslet and Lynskey that are excellent, if perhaps a little showy in the former’s case [Hey, she ended up in the biggest-grossing film in cinema history, so if it was a spot of show-boating, it certainly worked!]