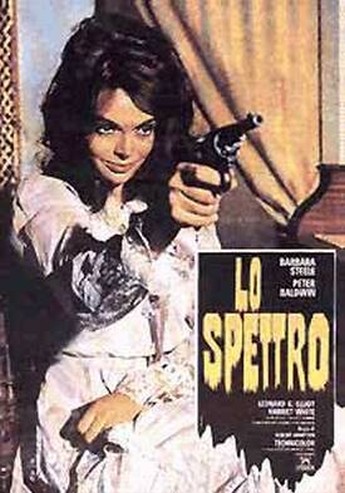 This “ghost” story takes place entirely inside a “Scottish” mansion just after the turn of the 20th century, where Mrs. Hitchcock (Steele) plots with her lover, the local doctor (Baldwin), to kill her crippled husband (Elliott). Only, his spectre continues to haunt, driving his widow to the edge of insanity. The print here is in awful condition, particularly near the start, which even has the first two scenes reversed. There are so many scratches and jumps as to make it hard going, and the plot isn’t likely to make you want to continue either, with just about every cliche in the screenplay book dusted off for our entertainment. And if she wants her husband dead so badly, why does she prevent him from committing suicide?

Fortunately, the performances help rise above the material, even though the dubbed accents leave me suspecting Scotland was chosen as a setting by lobbing darts at a world map. Steele shows why she is perhaps the icon of 60’s Italian horror, delivering the kind of performance that makes murder by her request seem not just plausible, but almost inevitable. A sequel of sorts to The Terror of Dr. Hichcock [sic], also starring Steele and White, with Freda directing, the atmosphere is the main thing here, and there’s no shortage of it. Even if you know the resolution is going to be a terrible disappointment – and it is – this is no disaster.