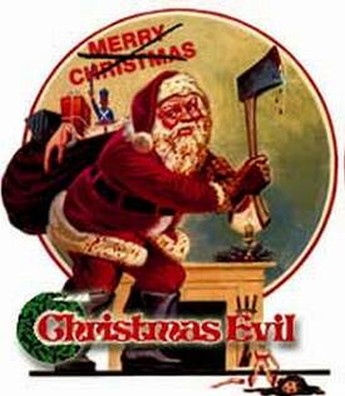 This is an idea with potential: Harry (Maggart – Fiona Apple’s father!), traumatised by seeing ‘Santa’ go down on his mother, grows up with a twisted take on the holiday; he monitors the local kids to see if they’re naughty or nice, works in a toy factory, etc. When the rest of society fails to observe the festive season with the appropriate gusto, he starts to kill the worst offenders. This might have worked as a ferocious satire on commercialism, with Harry a ruthless defender of the true spirit of Christmas, and occasionally – as in the police lineup of Clauses – heads in this direction. TV reports, warning people to stay away from Santa, also hint at the possibilities.

However, too often, it’s left to Maggart to carry the movie, and he’s definitely not up to the task, mostly resembling Pee-Wee Herman, and humming Santa Claus is Coming to Town in a doomed attempt at menace. It needs someone who can project a more credible threat, and despite the appearance of a mob of New Yorkers with flaming torches, never reaches the heights of absurdity necessary to the concept. Except, it has to be said, for the ending, which looks like it comes totally out of left-field, but is apparently not quite what it seems. Regardless, if you think of the most ridulous way this could possibly finish, you’ll still probably come up short. Jackson never wrote or directed another film – and seeing this one’s finale, it’s probably a good thing.