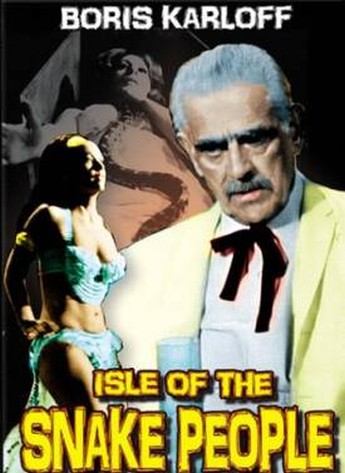 One of a series of movies made by Karloff just before his death, his scenes took place in Hollywood, while the rest of the film was shot in Mexico. Actually, I just typed “was shit”, and am very tempted to let that stand, given the apparently endless, tedious footage of voodoo ceremonies here. Bertrand plays a cop, send to a remote island to investigate reports of strange religious rites, and shake life into the local force, led by Wilhelm (Bertrand). There, he meets local lord Carl Von Molder (Karloff) and his innocent niece Annabella (Julissa), there to enlist uncle’s help in her temperance campaign. I’m sure I don’t have to hint at who is behind the evil goings-on, who is going to end up on the altar, and who is going to rescue her. Or him…oh, who am I trying to kid?

Apart from the midget voodoo priest in his top hat, there isn’t a great deal of interest here. Karloff, in his 80’s, looks frail, but still has command, while there’s fun to be had with lines like Annabella’s, “Modern science has proven that alcohol is responsible for 99.2% of all the worlds sins!” There are all kinds of sordid undertones – necrophilia through lesbianism to the frequent use of phallic snakes – but in terms of actual content, it’s tamer than I’d expect from the director of Spider Baby. You could send this one back, twenty-five years before it’s 1971 release, and it wouldn’t seem out of place.