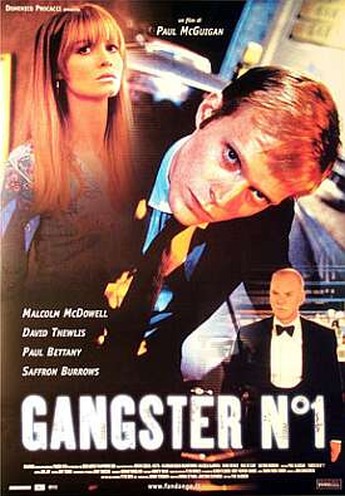 Every time I see Bettany in a film, I’ve been impressed; on this occasion, he imbues his nameless 60’s gangster with an intelligent viciousness that is highly chilling. If his character had Ben Kingsley and Michael Caine – in their Sexy Beast/Get Carter personas – as uncles, I wouldn’t be surprised. He gets hired by suave, sophisticated thug Freddie Mays (Thewlis), and immediately sets his sights on taking over from his boss. It’s not giving away much to say that he does, but fast-forward to the end of the millennium and his elderly incarnation (McDowell, who also provides voiceover for the earlier segments) is about to re-encounter his role model, who has just got out of prison after 25 years…

Apart from Bettany’s shark-like performance, there’s some other stuff to admire, such as a torturous murder shot largely from the victim’s point of view, and an interrogation scene that can only be described as psychologically brutal. However, in some ways, Bettany’s performance is too good; between that and the movie’s structure, there’s never any doubt or suspense over who’s going to end up on top. McDowell’s narration is also often stating nothing but the bleedin’ obvious, and his performance in the final confrontation rings hollow. He certainly looks the part though; had Clockwork Alex had grown up in swinging London, it’s entirely probable that this is how he would have turned out.