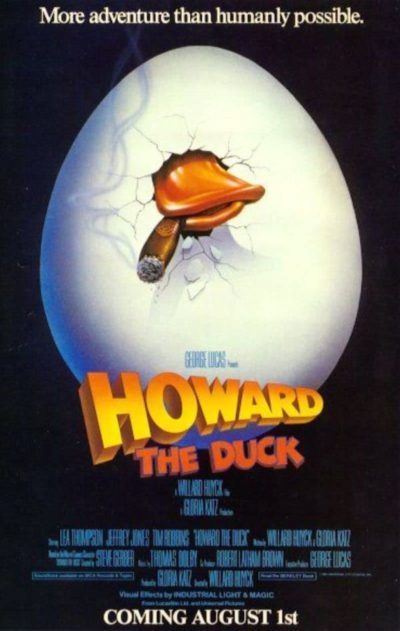 [20] Slagged off last time, Miles Wood insisted I re-view it: “it is a terrific movie”, he said, “you owe it to yourself and to Howard to give it a measly two hours of your life”. So I did. And? It still hasn’t a clue what it’s supposed to be: if it’s a comedy, it ain’t funny, despite leaving no “duck” pun un-utilised. Lea Thomson asking “Can I find happiness in the animal kingdom?” is satisfactorily perverse, and the hyper-extended, excessive climax almost makes the effort worthwhile. However, the novelty of a kid in a feather suit soon wears off, and Howard comes across as just plain unpleasant. Perhaps that explains the original title: ‘A New Breed of Hero’ means one you don’t like very much. What are people like Thomas Dolby and Tim Robbins doing in this? [save inane mugging in the latter’s case] Divide by the budget and you certainly have a viable contender for Worst Movie Ever, on a per-dollar basis. Sorry, Miles!