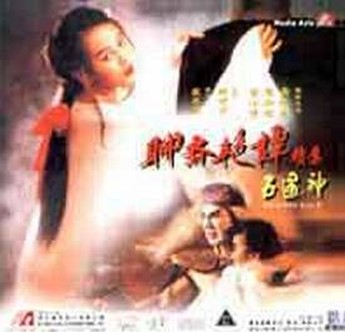 On the one, er, hand, you’ve all but lost Amy Yip; on the other, you gain Wong, though his performance largely consists of hissing and wearing a fluffy white wig. What the two films share is a wild variation in quality; this time, the money and effort go into some great production design, but they make the plot up as they go along. Wong’s demonic entity is miffed ‘cos his love gets burned at the stake… reincarnation… human sacrifice… you know the drill. The flesh is copious and occasionally eye-popping (in particular, the woman pouring molten wax all over herself), yet any eroticism gets snuffed out by laughable elements such as the utterly inappropriate music, or cutaways to someone eating a banana. The last fifteen minutes passes almost without any dialogue, and while you can’t dispute the imagination that’s gone into this, it might have been better if some of the energy had been directed towards more conventional areas, rather than coming up with interesting shaggings.