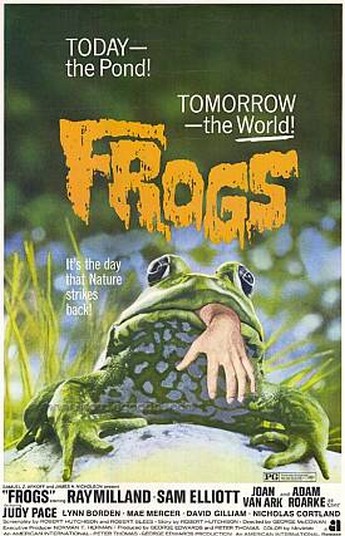 The trailer finished with the grammatically questionable line, “Frogs is coming!”, and indeed, the whole concept here is somewhat shaky. Not that you need explanation for a “When Animals Attack” flick – see The Birds for details – but it helps if your creatures are threatening. Here, the combination of small reptiles and amphibians are largely innocuous; their major mode of attack seems to be waiting until a human does something stupid, such as shooting themselves in the leg. Quite how this rather small evolutionary niche evolved is unexplained. Between this and innumerable shots of the titular creatures hopping around (they never do anything – the implication is that they’re in charge somehow), any sense of menace is largely limited to a few shots of the actors getting closer to rattlers and crocs than SAG rules now permit.

The characters are stuck on an island in the middle of nowhere; the phone doesn’t work, and when some try to leave, they don’t make it. The best of them is Ray Milland’s millionaire patriarch, who refuses to let little things like, oh, multiple deaths, spoil his birthday party. In contrast, Smith (Elliott), a photographer with ecological tendencies, suspects it’s nature’s way of hitting back, though the mechanics (and why dogs, for example, are unaffected) remain unclear. One nice touch is a hint that this rebellion might be happening everywhere, but regrettably, we don’t get to see frogs storming the White House. Given American International Pictures’ tendencies, I can only imagine it’s because no-one thought of it. That’s a pity; despite MST3K potential and a few cheap laughs, we could have done with more.