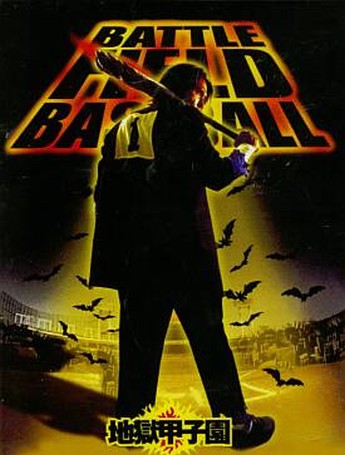 Actually, the alternate title is probably closer to the truth for this one, since the amount of genuine baseball that takes place here, is at the “May contain traces of peanuts” level. Jubeh (Sakaguchi) is a juvenile delinquent who starts at his latest school, Seido High, with low expectations – until they discover his baseball talents. But he has sworn off the sport, as revealed in a touching musical number, because his fastball killed his own father. However, he’s talked into returning by the headmaster, who needs Jubei’s help, having learned their first game is against Gedo, a school who have abandoned all pretense at competition, in favour of wholesale slaughter. And for some reason, all Gedo’s players have green skin.

In case you hadn’t worked it out, this is not serious at all, and treating it as such may lead to brain implosion. It is largely a parody of the “plucky underdog” school of sports cinema, and cranks up to eleven all the cliches usually found there. Seen as such, it largely works, and feels like a Japanese version of a Stephen Chow film – the title is an obvious nod to Shaolin Soccer. Yamiguchi, making his directorial debut (he wrote the screenplay for Versus, which also starred Sakaguchi), seems to believe that shouting is inherently funny; this and the lack of plot structure are irritating, but what the hell – I laughed. Sometimes with the film, sometimes at it, but it kept me amused; Chris, however, dozed off, so it’s likely that your mileage may vary.