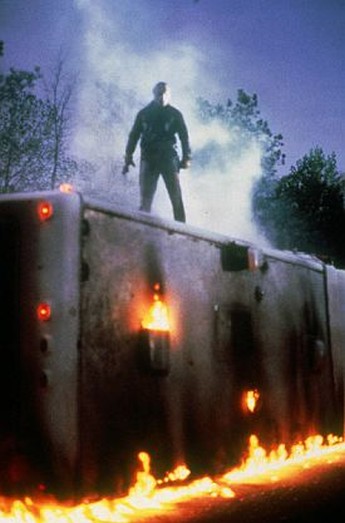 “I’ve seen enough horror movies to know any weirdo wearing a mask is never friendly.” That line sums up the somewhat-meta approach on view here – enhanced as a result of the fact that it’s delivered by the director’s sister. All connection with reality evaporates when Jason is resurrected through a lightning-bolt, and McLoughlin (who’d go on to direct Date With an Angel!) opts for a more tongue-in-cheek approach that is welcome, especially by those of us who watched the previous five episodes in quick succession. The rest of the features are still there, more or less – camp counsellors, Crystal Lake (now renamed Forest Green) – but Jason’s strength and apparent immortality get ramped up as a result of the supernatural elements. In contrast, both the sex and the violence feel considerably more restrained than previously.

That is something of a shame, since if you can’t rely on a Friday the 13th movie to deliver the tits and gore, what is the world coming to? As always, however, it’s hard to be sure how much, of the latter at least, is due to the makers and how much the MPAA. Credit does go to McLoughlin for finally putting kids in peril – it is supposed to be a summer-camp, dammit – and for getting Alice Cooper to chip in for the soundtrack, which feels like a passing of the torch from a horror icon of one generation to the next. Most of the humour works, rather than seeming forced, as can often be the case in horror-comedy, with the James Bond parody particularly memorable. Although, boy, did it take a while, all the aspects of the Jason we know are finally present, and the results are not bad at all.

Body count: 18. Best kill: While the deaths are almost as plentiful as in part five, as noted above, the red stuff is somewhat lacking, despite opportunities like a simultaneous triple beheading. Probably the best is the victim whose face gets slammed so hard into the wall of a camper, that the outside becomes their death-mask.