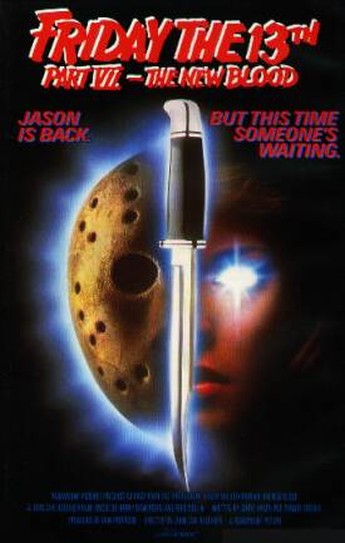 After the traditional flashback, seven-year old Tina watches as her father drowns in Crystal Lake after the pier he was standing on collapses. A decade later, Tina (Lincoln) is taken back to the lake by her therapist, Doctor Krews (Kister), along with her mother (Blu) – turns out Tina is a latent telekinetic. She inadvertently releases Jason – here, played for the first time by Kane Hodder – from his imprisonment at the bottom of the lake, just in time for the “surprise party” of teenagers, conveniently being organized next door. They’re the usual mix of stoners, sluts and nerds, with the exception of the token good guy, Nick (Blair). Tina starts having visions of the neighbours being killed; Dr. Crews thinks it’s repressed guilt over the death of her father.

This certainly takes to a whole new level the “Jason Vorhees as unstoppable killing machine” concept, with at least four or five moments where Tina and Nick think they’ve killed him off, only for him to rise again. That said, as noted in our original review, his final demise is quite awful. The concept of Tina having mental powers that she can use against Jason is cool, but badly implemented – remarkably, she suddenly learns to control them effectively, at exactly the moment it’s necessary to the plot, and not a second before. Outside of the heroine, there is a complete lack of sympathetic characters, even by the low standards of the series there. It could be argued this renders their subsequent demises more satisfying, and that is true to some extent, it also means that every second they stay alive and are on screen is something that has to be endured. I must confess, I fell asleep the first time I watched this.

Body count: 15. Best kill: While significantly reduced in the R-rated version, we have to go with the victim who tries to hide in her sleeping bag, only to be swung around in it, like a sock full of pool-balls, into a tree. Repeatedly. Like, six times.