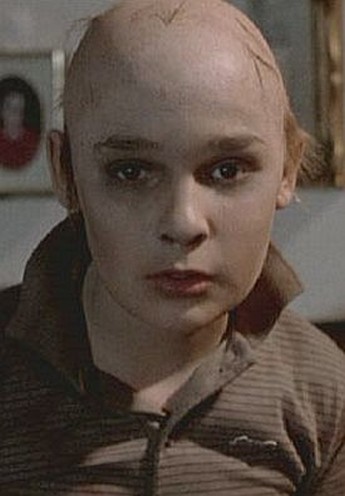 This is probably the closest thing the series has to an all-star cast. Though it’d be truer to say “would be star” cast, as neither Feldman nor Glover were exactly known at the time – their breakout roles in The Goonies and Back to the Future were still in the future. From a modern perspective, it certainly adds an unexpected bit of glitter, and the film itself is a significant improvement on the preceding entry. The format is more or less unchanged, but the hormone levels are off the charts, resulting in additional gratuitous nudity [the skinny-dipping, previously off-screen, is seen in all its glory]. Additionally, the concept of Jason as an unstoppable force is a lot more well-developed here, with the final reel showcasing a number of elements that have since become near cliché, as Trish (Beck) tries to escape from the house with kid brother Tommy (Feldman).

That’s definitely the best section of the film, going full-bore at the horror trope of “girl vs. maniac” with energy and spirit. and Beck is a good “final girl”. As usual, the first half is a good bit less interesting as things get set up, though I did enjoy the sequence in the hospital, in which two medical personnel have their morgue makeout-session rudely interrupted by Mr. Vorhees. Glover’s character is also off-centre, and an interesting precursor to the weirdoes he would make a living playing for much of his career – check out his dance moves, which resemble a praying mantis having an epileptic fit, or possibly a crashing helicopter. However, this has basically abandoned all pretense at being anything other than a slasher pic. This is so radically different from the first film, it might as well be an entirely independent piece of work, with only the token “story so far” pre-credit sequence to link this to the earlier entries. And it might be all the better for the lack of pretension.

Body count: 13 (excluding Jason). Best kill: ok, not really a “kill,” since Jason returns – I trust that’s not a spoiler. But getting a machete to the face, which he then slides down the blade to the floor… That’ll do. Glover’s departure, by corkscrew and meat-cleaver, is also effective.